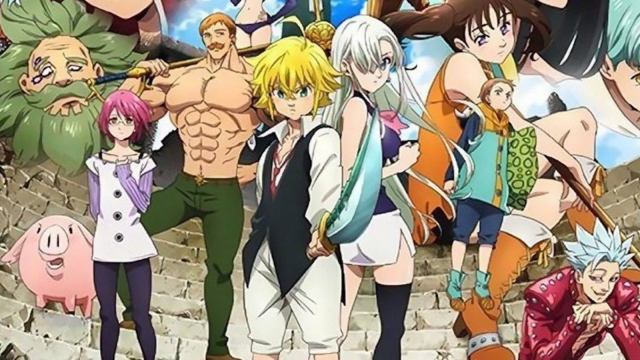 Seven Deadly Sins has captured anime fans since its debut almost a decade ago. Based on the Japanese fantasy manga of the same name, Seven Deadly Sins follows Elizabeth, a princess who recruits a group of disbanded warriors to take back her kingdom from the Holy Knights.

Since its premiere, viewers have been hooked on the series’ characters and the countless battles they take part in. But which character is the best battler? Which tops them all?

Diane’s ability to quickly grow 30 feet tall is quite useful in battle. However, Diane does not like fighting or violence at all and tries to be as peaceful a person as she possibly can. Being knowledgeable about how strong you are but refusing to use it is a skill that is rare, but when Diane does use her powers, fans see her tap into her maximum strength levels.

Even though she represents purity in the Ten Commandments, that does not take away from how powerful Derieri is. Her powers make her essentially unable to be hurt. Even before she ended up being absorbed, she was able to force repeated attacks during her battles that would never end. She also has the ability to be reincarnated when she dies and will continue to be able to keep her power of repeating attacks.

Having super strength is one thing, but having super brains like Ludociel takes it to a whole new level. Superintelligence can be incredibly useful, especially as one gets older. Ludociel is also the leader of the Archangels, and anyone who has ever had to be a leader knows the mental strength that you must have is really top tier. You have to know each person that you are in charge of and how to properly lead them. Ludociel also boasts magical powers, something that certainly can come in handy.

Even though she is not the best or most skillful fighter in the world, Elizabeth still has some of the best magic around. This allows her to really make up for her lack of fighting skills. Her magic allows her to force her opponents to not want to be in the fight anymore, thus allowing her to remain unharmed while fighting. Even though she might not have the best fighting skills and power, whenever you do not have to be harmed during a battle, that is a great power to have.

Keeping with the theme of magical powers, Merlin is the best and most powerful magician on the show. This allows her to go up against pretty much anyone who dares to come across her in a battle. Aside from being a powerful magician, Merlin is also one of the smartest characters on the show. Being able to combine both brain power and magic makes her incredibly dangerous.

Having a power level that puts you in the same conversation as the Demon King is very impressive, and Escanor is certainly of that caliber. Unfortunately, he is not able to sustain his maximum power levels for very long; usually up to just one minute. He also is unable to access his powers at night, making him a huge liability.

However, the fact that he is so powerful and strong when he is at his peak sets him a peg above some of the series’ other characters. If he learns how to be able to have his powers around for longer, he will undoubtedly fly up even higher on this list.

In battle, one of the most important things you can have is a high pain tolerance, which is exactly what Ban possesses. After not having a high pain tolerance for so long, it appears that Ban learned after having spent so much time in Purgatory. He is able to Snatch easier now, especially later on in battles when his foes are not as strong anymore. Ban also was able to last for around 60 years while battling the Demon King. He certainly has grown into one of the most complete and strong characters on the show.

Mael, being the original wielder of sunshine, obviously possesses great power and strength. In addition, Mael is able to still use his powers even after sundown, one of the more useful traits that set him apart from others on the list. Mael is often compared to Escanor and, while Escanor most certainly has a higher ceiling than Mael, a battle of strength does come down to Mael being able to last longer, as well as use his powers after sundown.

Demon King ultimately sets the standard of strength in The Seven Deadly Sins. He’s the one that everyone looks up to and compares their skills with. Even so, that is not all that Demon King brings to the table. Demon King is said to have a power level of 750,000, putting him at the top of the top in terms of tiers. Demon King is known to crush those who dare come against him, usually with relative ease. He has all of the skills and the abilities to withstand pretty much everything thrown his way.

How did he defeat Demon King? Well, Spending thousands of years in Purgatory purely fighting Demon King and gaining the skills necessary to complete the task certainly helped. While most of this list is certainly up for debate, there is no debating that Meliodas is certainly the strongest of all.