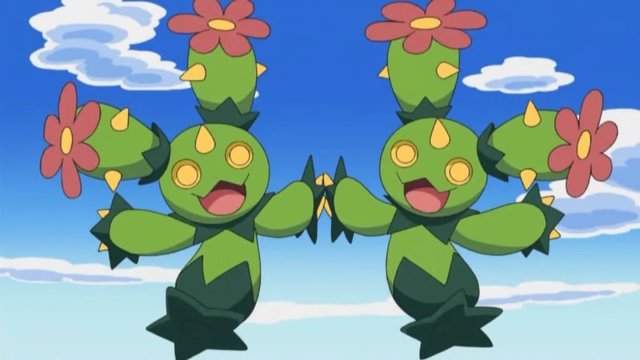 Finding inspirations for nearly 1,000 Pokémon could not have been easy. That’s why there are Pokémon based on vanilla ice cream, a set of keys, and an Israeli-British magician. When you consider those Pokémonstrosities, cactus-based Pokémon don’t sound too stupid. In fact, they’re pretty sharp. Here are the best members of the Pokémon cactus club.

Cacnea was introduced in Generation III as the 331st Pokémon. Beyond being named and designed after a cactus, this Pokémon lives in the desert and can survive 30 days without water. Its powers include water absorb, sand veil, and needle arm. Cacnea has a base stat total of 335.

In the anime, Cacnea was caught by James and later given to Gardenia.

As the evolved form of Cacnea, Cacturne is larger and stronger but has many of the same attributes. It is active at night in dry regions. For all its cac-ties, Cacturne is classified as a Scarecrow Pokémon, which is reflected in its eyes, mouth, hat, and general creepiness. It made its anime series debut in the episode “A Cacturne for the Worse” as Harley’s signature Pokémon.

Unlike Cacnea and Cacturne, Maractus does not evolve from or into any other Pokémon. That’s not the only miraculous thing about Maractus. It’s a portmanteau of “maracas” and “cactus,” so it looks like a cactus but acts like maracas. As Ash’s Pokédex states in the anime, “When Maractus dance in rhythm, they sound like maracas shaking.” Despite its wholesome existence, Maractus is quite powerful. The musical Mammillaria has a base stat total of 461.

Some Pokémon resemble cacti but have no obvious connection to the spiky succulents. These are Ludicolo and Carnivine, both of which have been incorrectly cactusfied, despite the former deriving from a lily pad and the latter mirroring a Venus flytrap.