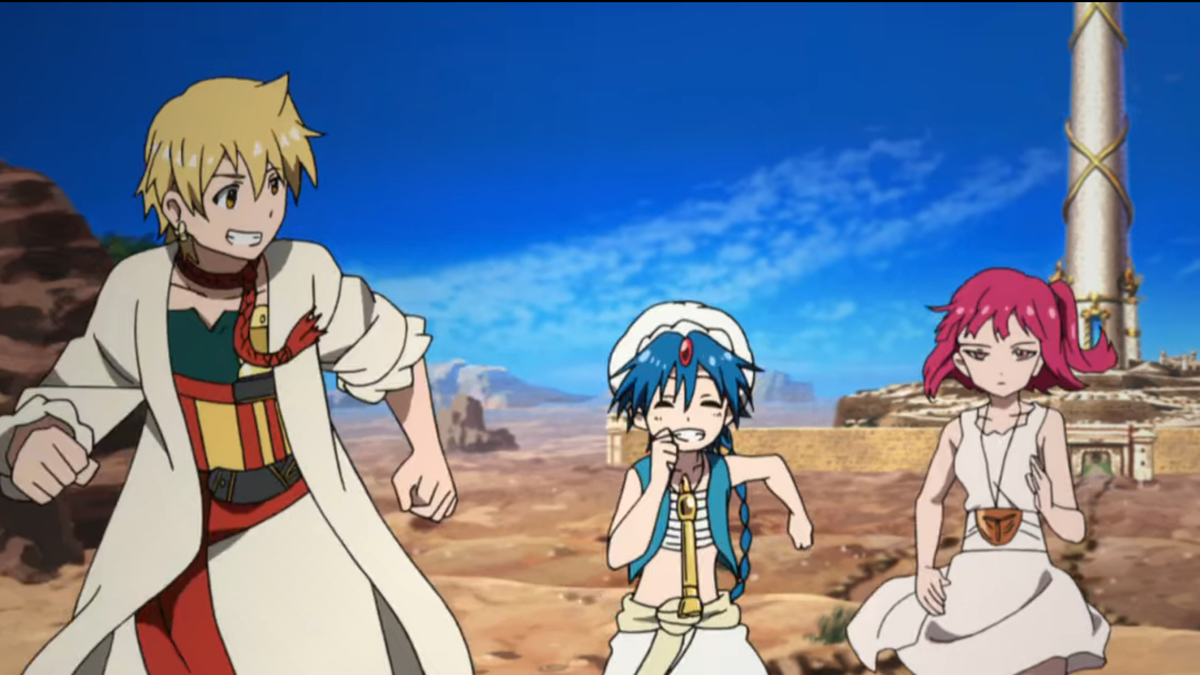 Modern life can be boring and routine, with our whereabouts often limited to the distance between work and home, and occasional trips to the local grocery or convenience store serving as our most interesting weekly diversions. Seeing the same, dull sights every day can be bad for your mental health, so why not opt for a change of scenery, even if it’s onscreen? Sometimes we need a break from the tedium of reality, and if you’re a fan of anime, what better way to escape than to watch some great adventure anime?

To help out, we’ve created a list of the 10 best adventure anime of all time, from the Sword Art Online series to Tower of God. These anime will help you get through the rough times until you’ve saved enough money for that much-needed, well-deserved vacation.

Director Shinichiro Watanabe’s 26-episode, 2004-2005 anime Samurai Champloo revolves around the shared journey of two samurai and a young woman who awkwardly meet and pair up so that she can find “the samurai who smells of sunflowers” with their help. As you travel alongside the frequently bickering companions in Samurai Champloo, enjoy the cuisine, culture, and setting of the Edo period of Japan, while weathering the social and armed conflicts you’ll frequently come across. Perhaps you’ll have some luck figuring out our group’s questionable status. Are the trio friends, enemies, or frenemies? Maybe they’re just strangers traveling and working together for a while? Have fun solving this puzzle.

Perhaps you’re tired of being limited to one planet. In the mood for some space adventures? Maybe you’d like to encounter a space cowboy? In director Shinichiro Watanabe’s 26-episode, 2001 anime, Cowboy Bepop, join Spike, Jet, Faye, Ed, and dog Ein aboard their spaceship known as “The Bepop,” as it flies from planet to planet while its crew members hunt down vigilantes to make a living while running from their dark pasts. Learn about futuristic planets, cultures, and technology on each mission in Cowboy Bepop while readying yourself to face the unavoidable battle of unsatisfied vengeance that lies ahead. Come to terms with the frequent space fights, get used to an empty fridge, and prepare to ask yourself existential questions worthy of a drunk English major as the story concludes. There’s also a movie you can watch, boasting the simple title, Cowboy Bepop: The Movie.

Based on a popular webtoon by Lee Jong-hui and with a second season already in the works, 13-episode, 2020 anime Tower of God, directed by Takashi Sano, is a great experience for anyone who qualifies as a dream chaser. If climbing an enormous tower and defeating challenges along the way could grant you your utmost wish, would you do it? This is the overarching theme of Tower of God. Protagonist Baam follows his beloved companion, Rachel, into the tower where she has gone to realize her own dream. As you climb each level alongside our hero, root for Baam as he deals with betrayal and hardship while facing enemies and making friends, becoming steadily stronger with each new victory. Be sure to check out the ongoing webtoon on online app WEBTOON, where you can read it for free.

Based on Eiichiro Oda’s world-famous, long-running manga, the 20-season, 1,038-episode anime, One Piece, has aired since 1999. It is a great watch for fans of sea travel. Hop aboard ship with Monkey D. Luffy and his gang, the Straw Hat Pirates, and sail from place to place in search of the legendary treasure “One Piece,” which will allot the straw-hat-wearing pirate the position of “Pirate King,” granting him the ability to fulfill an unknown wish that he has long nurtured.

Along your sea voyage, prepare to shed blood, sweat, and lots of tears with the Straw Hat Pirates, in addition to facing the attacks of enemy organizations and strange monsters. The dramatic characters with complex backstories you’ll encounter in One Piece will make you laugh and cry. Don’t forget to check out the One Piece movies as well, with the 15th, One Piece Film: Red, about to drop.

If you’re into revenge fantasies with a supernatural tilt and don’t like to stray too far from one setting, then you’re in luck, with director Hiroyuki Imaishi’s 25-episode, 2013-2014 anime, Kill la Kill, fitting the bill. Enter Hoji Academy side by side with Ryuko Matoi on her quest to find out who murdered her father, fighting battles against enemies with the aid of her powerful and sentient clothing, Senketsu. If you’ve ever wanted to see a high-stakes battle waged using clothes as weapons, then this is the unique anime experience for you. If you’re a fan of crass humor and plot twists, you’ll also enjoy plenty of these in Kill la Kill.

5. Wandering Witch: The Journey of Elaina

If you love magic and travel combined, then 12-episode, 2020 anime, Wandering Witch: The Journey of Elaina, is the virtual escape for you. Inspired by the light novel series by Jougi Shiraishi, with the accompanying illustrations performed by Azure, this witchy anime directed by Toshiyuki Kubooka contains no shortage of beautiful scenery, delicious food, uplifting humor, and thrilling drama. Hop aboard Elaina’s broomstick as she flies from country to country, fulfilling her childhood wish to see the world. Just don’t expect the protagonist of Wandering Witch to whip out her wand for you if you get into a scrape, even in the darkest of circumstances. On this journey, you’re on your own.

If you’re a little bit more of a homebody but nevertheless desire to experience the occasional adventure, then creator and director Yoh Yoshinari’s two-season, 25-episode 2017 anime, Little Witch Academia, may be the right fit for you, especially if you’re also a fan of magic. Meet Atsuko (“Akko”) Kagari, an awkward but lovable witch-in-training who wants nothing more than to follow in the footsteps of her favorite witch, magic-show performer “Shiny Chariot.” Follow Akko and her friends as they get in and out of scrapes at Luna Nova Magical Academy, which is like an anime version of Hogwarts with My Hero Academia vibes.

Enjoy all the ups and downs of school life in Little Witch Academia without having to take out any more student loans in this grand and magical anime adventure led by kick-ass female characters who do everything from saving their school to protecting their country. Have your broomstick ready for takeoff so you won’t get left behind. Don’t forget to check out the movies that preceded the anime, titled Little Witch Academia and Little Witch Academia: The Enchanted Parade, also created and directed by Yoh Yoshinari, along with writer Masahiko Otsuka.

Flying on a plane is cramped and awkward, with little room for movement or breathing, and the inescapable company can be downright terrible. How about flying on a magic carpet in the open air instead with Aladdin and his friends? With the manga that inspired it written and illustrated by Shinobu Ohtaka, the anime directed by Koji Masunari boasts two seasons, starting with the 25-episode first season, Magi: The Labyrinth of Magic from 2012-2013 and ending with 25-episode second season Magi: The Kingdom of Magic from 2013-2014.

Travel with the young magi and his friends on an exciting adventure. Discover your own dreams and identity alongside them while sometimes stopping to conquer a dungeon to gain treasures and powers from a djinn or to help resolve the difficulties faced by host societies along the way. What unfulfilled wishes do you have?

Before you put on your NerveGear so that you can enter the video game, be warned that virtual reality can sometimes be as dangerous as real life. While it’s undeniably a thrilling experience, this new technology comes with some risks to players. There’s the possibility of getting trapped in the game by a sociopathic creator who has decided to create a death game with unwilling participants or having to avoid being murdered by former virtual gang members out for power and blood in the real world.

Throughout your Sword Art Online journey, you’ll need to make allies, gather knowledge, acquire skills, and collect items so that you can win virtual battles to avoid death in the real world. Become a master of the sword and the gun to improve your odds of survival. Don’t forget to enjoy the lovely medieval fantasy or Wild West setting in each game. However, don’t relax too much because danger is always lurking just around the corner.

Would traveling across an alternate world on a flying bison or polar-bear dog appeal to your travel instincts? If so, you should check out creator Michael Dante Dimartino and Bryan Konietzko’s thrilling world in the three-season, 61-episode, 2005-2008 anime, Avatar: The Last Airbender, along with its sequel, the four-season, 52-episode, 2012-2014 anime, The Legend of Korra.

In Avatar: The Last Airbender, join Air-Nomad Avatar Aang, along with his friends, as he visits the Water Tribes, the Air-Nomad temple, the Earth Kingdom, and the Fire Nation. He does this all while trying to master his ability to bend water, earth, fire, and air before Sozin’s Comet, when archenemy Fire Lord Ozai plans to utilize his firebending subordinates’ enhanced abilities to subjugate the rest of the world.

After that adventure, tag along with Avatar Korra of the Southern Water Tribe and her friends in The Legend of Korra as she strives to improve her skills in airbending, as well as adding metalbending and energybending to her list of accomplishments. Meanwhile, enemies attempt to take over territories or eliminate benders requiring her constant readiness to fight. Prepare to enter a world that’s changed since Aang’s time, with a more modernized setting and alterations in cultures.

In both Avatar: The Last Airbender and The Legend of Korra, steel yourself for high-stakes battles involving cool otherworldly abilities, along with moments of intense suffering and hardship as the two Avatars attempt to carry the world on their shoulders. However, you’ll enjoy the frequent moments of humor and beauty in addition to the exposure to a beautiful world based on Asian and Native cultures.