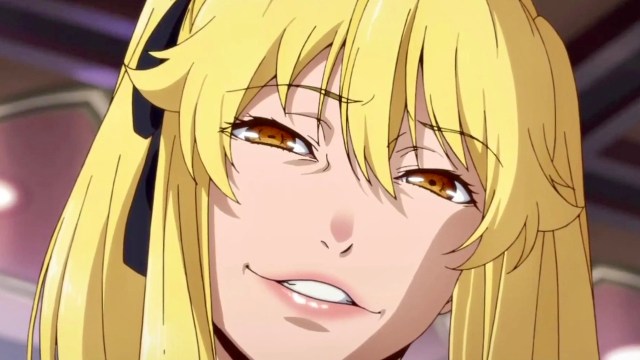 Anime girls can be the sweetest and cutest characters on screen with bubbly personalities, and some can be vicious and ruthless vixens. Somewhere in the middle lies the smug anime girl, who often wears a look of pride on her face. Whether they’re portraying a hot and cold tsundere, or a character with major sex appeal, they have become a recurring presence in various manga and anime, with many fans showing increasing interest in them.

These smug looks can translate to arrogance, wealth, wit, or power, but one thing’s for certain — they’re not to be messed with. Here are 15 of the best smug anime girls who always find a way to take control and dominate whatever situation they’re in.

Kakegurui is an anime that is primarily carried by the brilliant female characters, and almost every single one bears a smug look. As a series that focuses on the lives of young gamblers, poker and smug faces are usually the order of the day. However, with the introduction of her own spinoff series, Mary Saotome earns the crown for the most smug girl in Kakegurui. From her condescending looks, tone, and comments, this proud girl isn’t one to toy with, and rarely shows fear.

The Fate series features a lot of memorable and interesting characters, but Rin stands out as one of the best girls. She is incredibly intelligent, which allows her to be condescending to the people around her. She is also incredibly ambitious and fiercely loyal to the people she cares about, and while she starts out as a typical tsundere character, we find that there is more to her than meets the eye.

Yukino is very standoffish and rude to her classmates, which she often justifies because of her great intelligence. She considers her classmates as less fortunate than her because of her smarts, and comes off as very unfriendly and unapproachable. She often dismisses the thoughts and behaviors of her peers as silly but soon starts to learn more about social interaction as the series progresses.

Erina is one of the most smug girls out there, mostly because she was born and raised in luxury. She is referred to as the ‘God Tongue’ because of her superior food palette, and this has led her to become a condescending snob. Her default setting is superiority, so you can always find her looking down smugly at anyone around her, whether or not she likes you.

Megumin is a young Arch Wizard from the Crimson Magic Clan. She is as loud and volatile as the explosive magic she favors, and tends to have an air of cockiness around people she believes to be inferior to her. Megumin has shown that she is quite immature under her conceited persona and becomes defensive and sensitive when people mention her age.

Asuka is a child prodigy and Evangelion pilot who often looks down on her crewmates and the people around her. She is incredibly proud of her piloting skills and appearance and uses these qualities to look down on others. She can be very aggressive and doesn’t like to be treated as a child, and she often expresses her desire to be perceived as older by talking down to people.

Mai is the twin sister of Maki and co-heir to the Zen’in family clan. She and her sister were banished from their clan because of their low affinity for Jujutsu sorcery and Mai loathes Maki for her relentless ambition. Mai is a very snarky character and can often be found hiding smugly from a vantage point where she can take out people easily with her revolver.

Satsuki is one of the main antagonists of Kill la Kill and is the president of the student council at Honnoji Academy. She is extremely arrogant and callous which she backs up with her extreme intelligence and ability to wait out her plans to ensure success. She looks down on everyone around her but still manages to be incredibly charismatic and likable.

Nami is a young pickpocket when she is first introduced in One Piece and only joined the Straw Hats because she initially wanted to rob them. Over time, she genuinely fell in love with the crew and made genuine friendships. She is one of the smartest characters on the show and often displays her witty and cunning side, proving that she is superior to many of the men.

Yoruichi is an intelligent shinigami who was the former captain of the second division as well as the head of the Shihoin clan. She has the power to switch between a cat and human form and loves to shock people with random transformations, especially because she appears naked when transforming back into a human. She often acts smug, and as if she is five steps ahead of everyone around her, which she usually is.

Kaguya is known for her perfect smug face, followed by a cutting remark that effectively destroys whoever she is speaking to. Her position as vice president of Shuchiin Academy as well as the extreme wealth she was born into ensures that she is always in a position of power over the people around her.

Rize is an arrogant and selfish ghoul, known as the ‘Glutton’ because of her habit of gorging herself when she eats. She is a femme fatale character who loves her independence and often uses her smirking sexy personality to attract men to feast on.

Kurisu is regarded as one of the best female characters in anime because of her no-nonsense, fact-oriented personality. Where other smug girls may come at you from a place of unearned superiority, Kurisu talks her opponents down with a cool detachment and hard facts. This is just one side of her, as she also has a sharp and sarcastic side that comes out when she is around her friends.

Tatsumaki, also known as Tornado of Terror, is a powerful S-Class hero who is often mistaken for being younger than she is. She tends to be dismissive of the people around her and can be very brash and disrespectful. Ironically, she does not tolerate being disrespected at all and will often retaliate against people that talk down on her.

Beatrice is one of the main antagonists of the show, referred to as the Golden Witch of Umineko. She is thousands of years old and has a whimsical and psychopathic personality. She never does what people expect of her and her cackling laugh is an iconic part of her character, which usually shows up when she is torturing people.