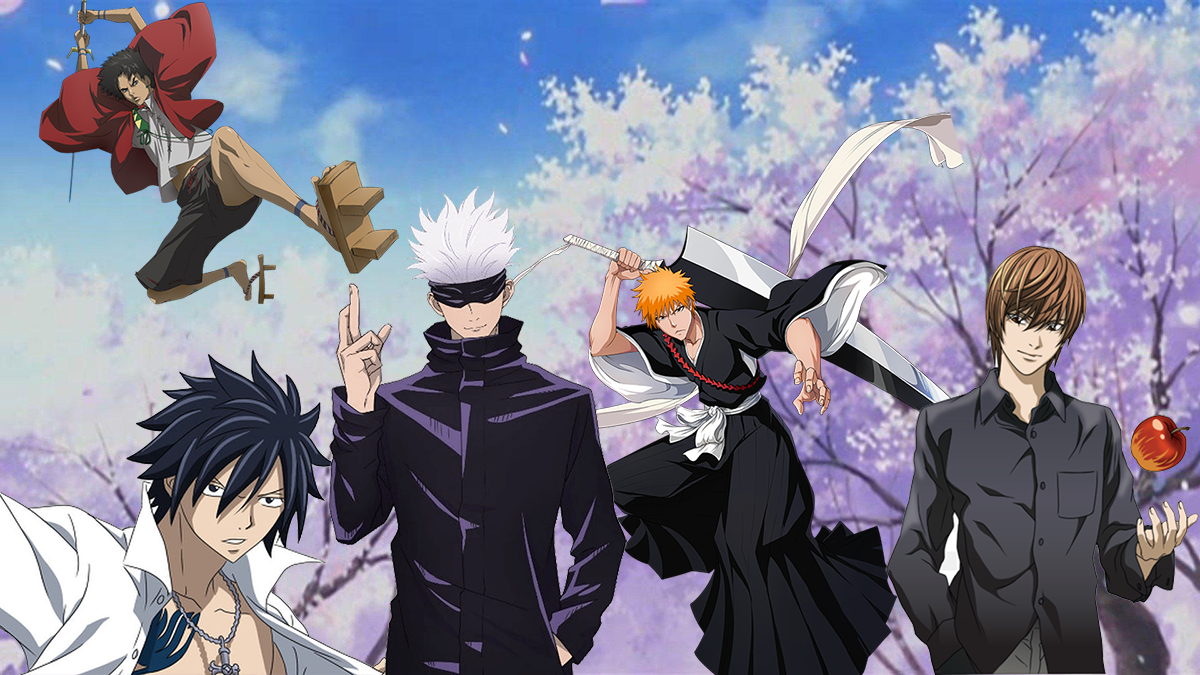 Even though anime originated in Japan, people all around the world have become fans of the many different characters and titles to emerge in the genre. Some anime are bigger than others, like My Hero Academia and Sailor Moon, but even less popular shows have dedicated fanbases, like A Lull in the Sea and The Ambition of Oda Nobuna. Anime fans come from all walks of life, so it makes sense that there would be such a vasty array of content for them to enjoy.

Now, some people might think it’s weird to find animated characters attractive, but others have been crushing on their favorite cartoon characters since they were kids. (Danny Phantom, anyone?) It’s not surprising that people find their favorite characters attractive, which is why we’ve put together a list of the top 10 hottest guys that anime lovers have collectively fawned over. Bear in mind that there may be some spoilers in the explanations for what these guys are doing here, so proceed with caution if you have yet to see each individual show.

10. Levi Ackerman from Attack on Titan

Levi is one of those characters that has a cold persona and isn’t very approachable to others. It would seem that his looks are the main reason for so many people loving him. He’s very respectable and respects others he deems worthy but isn’t opposed to ignoring those he doesn’t. Though he can be seen as cold, Levi is also incredibly empathetic and cares a lot about others’ safety and well-being. After finding out that all Titans could have been humans, he was a wreck and unsure of how to handle the idea that he’d been killing humans all this time. Levi is a complex character with many different attributes, but even just looking at him, it’s no surprise that he made the list.

From Cowboy Bebop, we have Spike Spiegel, who’s made a bit of a comeback over the past few years. Whether it’s his curly locks or the cool way he talks, everyone seems to have a thing for him, even those who have never even watched his show. Netflix’s live-action adaptation brought a new interpretation of the character to screens with John Cho in the role, but the show wasn’t well-received by fans. Spike is a bounty hunter with a mysterious past, so he’s already got the mystery part going for him. Other than that, though, he’s a calm, cool, and collected guy that spends his days not bounty hunting, but watching TV and taking naps. He’s the definition of a cool guy and has everyone fawning over him because of it.

When Horimiya first aired, half of the internet went crazy over Miyamura’s design. He was a hot new alternative guy with plenty of piercings. So why is he so low on the list? Unfortunately for us fans of the alt look, Miyamura loses the piercings and cuts his hair a little less than halfway through the series, so we lost out on a big part of what made him so physically attractive. Miyamura is a quiet student who hides who he really is from his classmates, which is the basic premise of Horimiya in the first place. Eventually he lets his guard down and starts to make friends and reveal his true nature to them. He’s a sweet and genuine guy who anyone would be lucky to date and he works at a bakery, so free snacks! Miyamura is more “normal” than some of the other guys on this list, but it doesn’t make him any less great.

Something about guys with white hair just hits different to anime fans. We don’t know if it’s because it’s not a color we’re used to seeing or if the white-haired anime guys really are just the best, but this list definitely proves that something’s going on. Gojo’s bright blue eyes are a stark contrast to his hair and pale skin, which immediately makes him stand out. His personality is a complex one, as he’s a teacher to students and while he’s playful with them, any adult he sees as weak might as well get out of his sight. Since he, much like the rest of the characters in Jujutsu Kaisen, has a desire for power and believes himself to be nearly invincible, he can be seen as arrogant, which he probably wouldn’t refute.

Anyone who’s ever watched Diabolik Lovers knows that none of the vampires are exactly “good” people, per se, but it doesn’t mean they’re not hot. Bad guys are hot, after all ⏤ that’s just the way it is ⏤ and vampires are no exception. The biggest problem with Ayato is that he’s kind of predatory, but it’s in more of a vampire hungry way than a sexual way. While it’s problematic, it’s all for the sake of plot and character development, so we’ll allow it. Ayato seems to be the “main” brother in Diabolik Lovers as we see him go through the biggest development in his relationship with Yui. He might be a jerk, but he does save her life multiple times even though he refuses to admit he has any feelings for her. It’s a cute cat-and-mouse dynamic that continues well into the second season.

The Best Anime Demons
1 of 2

Sesshomaru is a demon of few words and is technically considered a villain, but he’s hot all the same. Choosing between him and Inuyasha was difficult, but who doesn’t love a bad boy? Sesshomaru is a full-fledged demon who hates practically everyone else in the show, except for a young human girl, Rin. In Inuyasha‘s sequel series, Yashahime, we see that Sesshomaru eventually marries and has children with Rin. Even in the sequel, though, he seems to be just as cold, quiet, and mysterious as ever. Whether it be his voice, his design or his lack of personality, Sesshomaru has made an everlasting impression on Inuyasha fans.

Fruits Basket is an extremely popular anime that originally aired in 2001 and received a reboot in 2019 that told the entire story from beginning to end. Fans of the original series were thrilled, and a lot of it had to do with this guy right here, Kyo Sohma. Kyo is the bad boy delinquent with anger issues, so you can imagine how many people fawned over him. Other characters tend to shy away from him because of his harsh exterior, but not Tohru. She’s the only person that sees through his exterior. Kyo is part of a curse that makes it hard to be with the one he loves, so even as he starts to fall in love with Tohru, he refuses to admit it and pushes her away due to the curse and his destiny of being locked away. He believes that he’s doing what’s best for her and tries to put her first, even if that’s not really the case. Kyo almost always has good intentions with the people he cares about, he’s just not the best at explaining that.

One of the more stubborn guys on here is Tomoe from Kamisama Kiss. Being a demon, he is proud, seductive, and doesn’t like humans. However, he is tricked into a contract with the new land God, Nanami, a normal teenage girl. For most of the first season, Tomoe does the bare minimum to serve her, but she slowly falls in love with him and even admits her feelings, which results in him having to save her. After that, things slowly begin to change for the better. Kamisama Kiss and Tomoe are great examples of people growing into better versions of themselves. He becomes more compassionate and considerate of Nanami’s feelings and grows protective rather than just feeling obligated to protect her because of their contract. Besides that, we also have the natural demonic charm that comes with the white hair. Even before he comes around for Nanmi, Tomoe has that stubborn and arrogant charm that people love to hate. He’s a great combo of everything, which is why he’s in the number three spot.

Anyone who’s watched Maid Sama! knows that Takami Usui is one of the best anime guys ever. He was almost number one, but he does have some alarming moments throughout the series. Usui is someone who goes after what he wants, and in the series, that’s Misaki Ayuzawa, the student body president who the entire school is afraid of. All of the girls have crushes on Usui, but his sights become set on Ayuzawa after he finds out that she secretly works in a maid cafe to make money for her poor family. The two are complete opposites, but throughout the series we see Usui begin to take responsibility for himself and his actions thanks to the budding relationship between the two. Like Tomoe, it’s great proof that the right person can help someone grow into a better version of themselves, so while Usui is definitely physically attractive, by the middle of the series he’s also perfect boyfriend material.

The top of the list has to be Zero Kiryu. Not only is he incredibly loyal, but he’s the perfect strong and silent type. For anyone who has watched Vampire Knight, it was always a choice between Zero and the pureblooded vampire, Kaname. The main character, Yuki, had to choose between them and definitely made the wrong one. Zero was willing to do almost anything for her, including leaving to keep her safe. Yuki, though, ended up choosing Kaname after some disturbing revelations. Zero is one of those guys with a shell you’d have to break him out of, but it would be worth it. He has strong feelings for the few people he cares about and will protect them with his life. He goes through a lot over the course of the series, but through it all his main priority is to protect the one he loves, Yuki. Even after she chooses another man, Zero still swears to protect her. He’s nearly perfect.