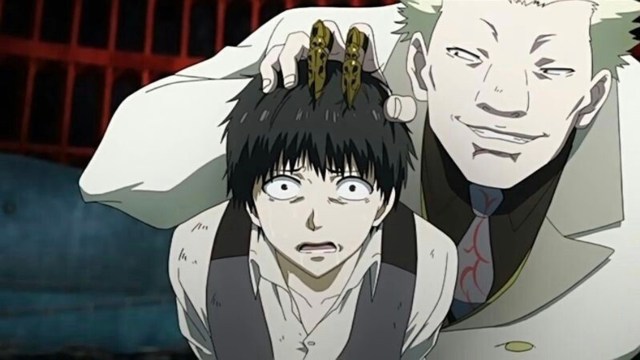 The Japanese anime market is a large and vast world that boasts several interesting stories — some extremely unsettling, and others, downright scary. In both horror and non-horror anime, certain scenes rouse fear in the audience and are almost always guaranteed to have you turning away from the screen.

These scenes are not for the faint-hearted, so proceed with caution when catching these spine-chilling, scary anime moments, ranked from least to most scary.

10. The Beast Titan (Attack on Titan)

This series follows humans as they try to survive in a world where they are hunted by titans. Although this series has several gory and scary moments, the scene that caused shock and fear was the appearance of the Beast Titan. Unlike the Colossal or Armored titan, the Beast titan was covered in hair and could speak. This level of intelligence was not something anyone had expected since no other titan could speak at the time of his introduction.

Berserk is known to be a very violent and gory anime series. It follows Guts, a lone swordsman, and the band of mercenaries he joins. Having to fight both humans, beasts, and demons, the group faces death several times. When Griffith, one of the most honorable characters, becomes one of the God Hand. He sacrifices the Band of the Hawks to an army of demons to be devoured. They get ripped apart and eaten by the apostles while the look of betrayal remains in their eyes.

The 1987 dark fantasy movie follows Taki and Makie who are members of an organization that protects humans from demon realm invaders. The partners are tasked with the safety of a dignitary and face many hardships. At the start of the movie, Taki is seduced by a prostitute named Perrie. After the two have sex, Perrie transforms into a spider Deltoid and tries to devour Taki. Talk about a date gone bad.

Parasyte is a sci-fi horror anime that follows the life of 17-year-old Shinichi Izumi. After a night where worm-like aliens descend on earth to invade human bodies and take control of their brains, Shinichi wakes up with one parasite inhabiting his right hand. Shinichi overcomes his initial fear and disbelief as he and the alien Migi strike a deal.

The first scene the audience sees when they begin this anime is of an unsuspecting couple — suddenly the man’s head splits open as he engulfs his wife’s head and bites it off. What a way to introduce viewers to the gruesome parasites.

The dark fantasy series tells the story of an ordinary boy caught up in the world of ghouls. Kaneki Ken is turned into a half-ghoul when he encounters an accident that makes him lose half his organs. A ghoul’s organs are then transplanted into him and now Kaneki is forced to face the hunger for human flesh.

A frightening moment in this series comes when Kaneki is kidnapped and tortured by a mad ghoul. Kaneki’s toes and fingers are repeatedly cut off after they regrow and a Chinese red-headed centipede is placed in his ear. In this situation, it is almost impossible to keep calm.

5. Death by Umbrella (Another)

Another is a horror story set in a high school. The story follows the new student Kouichi Sakakibara and his classmate Mei Misaki as they investigate a series of gruesome deaths that link back to their class. Their class is believed to be cursed and to avoid the curse, the entire class aside from Kouichi acts like Mei does not exist. The story gets creative with how characters die but one scene remains unforgettable. A student trips on a flight of stairs as the umbrella she once held in her hands opens up and she gets impaled by the tip.

4. Prushka’s Transformation (Made in Abyss Movie 3)

This series tells the bleak and almost hopeless story of two children descending into an abyss in search of adventure. Riko, Reg, and Nanachi go down into the deepest part of the abyss where return to the surface is impossible. Ascending would incur the curse of the abyss and would lead to excruciating death.

On the fifth layer of the abyss, the group meets Prushka, a child born in the abyss and the daughter of Bondrewd. In hopes of ascending the abyss without suffering from its curse, Bondrewd condensed Prushka into a cartridge, leaving her as a blob of her most vital organs and her remaining consciousness.

This series tells the story of six-year-old Gen Nakaoka and his family. Based on the author’s experiences as a survivor of the Hiroshima bomb during World War 2, the anime provides a part of actual human history. As Gen and his family suffer heartbreaking hardships, their village is struck by the bomb.

The story does not hold back the reality and detail of what happened when the bomb hit. A particular scene showed a mother and her child having their skin and eyes melt off their bodies as they become vaporized.

2. Rena’s Injuries (Higurashi When They Cry)

Higurashi is a murder mystery and horror anime series that has run from 2006 to 2021. The story follows the lives of six children as they experience ghastly deaths and the dreadful trauma that comes after. We get to see each of the children’s stories from different points of view. The one we are taking note of is the story of Ryuugu Rena and her village’s curse.

Feeling insecure and doubtful of everyone, Rena begins to madly scratch her skin until her skin peels off and something eerie flows out of her wounds. Maggots come pouring out of her injuries.

Junji Ito is a writer known for his extremely disturbing and eerie stories. This particular story follows Rie and her friend Yuuko. Yuuko is known to be quite talkative but one day she stops speaking. Finding it strange that Rie had stopped coming to school, Yuuko visits Rie’s home but Rie still refuses to speak. Yuuko returns the next day to see that Rie’s tongue has become a slug that cannot be removed or killed.