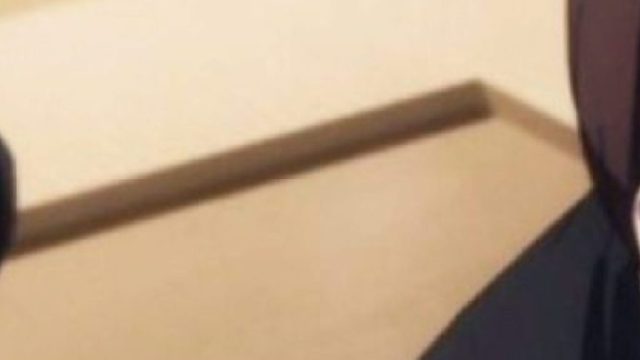 The cast of characters in Chainsaw Man just keeps growing and in episode six, we get to know Hirokazu Arai and Kobeni Higashiyama much better. Both of the rookies are on Special Division 4 and they might be out of their depths for this line of work.

In “Kill Denji,” the team, which includes Aki, Himeno, Denji, and Power, enters Hotel Morin in search of a devil who’s consumed the flesh of the Gun Devil. They’ve been collecting these pieces of the Gun Devil to lead them to the original source. When they enter, strange things start occurring, they can’t leave the 8th floor, the elevator is inoperable, there are more rooms on the other side of the window, and the rooms just open to other rooms across the hall. Division 4 is stuck and Arai and Kobeni aren’t handling it well. Himeno even tells Kobeni to hold up peace signs to distract her from freaking out.

In the previous episode, “Gun Devil,” Arai is shown to be a very uptight man who likes order. He’s got hair that’s short and spiky and a scar on his left cheek. Arai loses his mind when Himeno offers a kiss to anyone who kills the devil they’re searching for. He doesn’t believe that a woman should “give herself away” before marriage, which makes him more of a traditionalist with some old-fashioned values.

He’s shown as a caring teammate, and he tries to help his fellow teammate Kobeni, but he ends up succumbing to his own fears. Arai tried his best to help the frightened young woman in the hotel, but he has a panic attack and locks himself in a room. Like Aki, he too has a contract with the Fox Devil.

There’s an innocence to Kobeni, but she’s also very fragile. She’s small, has her black hair tied in a ponytail, and has two moles under her left eye and one near the right side of her mouth. Kobeni is the first person to freak out, but hearing her backstory, it’s hard not to feel sorry for her.

While everyone is in a hotel room figuring out how to get out of this supernatural mess, Kobeni’s sitting on a bed and keeping to herself. Arai thought that Kobeni became a Devil Hunter to send her brother to college, but she said that she was forced to do this. Her parents are set on her brother going to college since he’s the gifted one. Her options were to become a sex worker or go to college and she wanted to go to college.

They discover that the Eternity Devil is the one responsible for all of the mysterious happenings in the hotel. He’s a giant blob made of faces and body parts and it asks that Division 4 kill Denji for it. Once that’s complete, the Eternity Devil will let everyone else go. Kobeni comes out of her room holding a knife and chooses to take the offer. She charges at Denji, but Aki comes in and kicks the knife out of her hand and Himeno follows up by hitting her in her stomach. That knocks the air out of her and she falls down.

Later, Arai comes into a room where they had gathered the food left over by guests and sees that it’s all been eaten. He blames Power who’s standing nearby with crumbs on her face, but she denies it. Kobeni then enters the room, and in her fractured state, comes up with the notion that Power is the one who brought the Eternity Devil here. Arai tries to reason with her, but she won’t hear it and thinks that he’s a spy.

Out in the hallway, we see that Kobeni’s fear is powering the Eternity Devil and it grows bigger. It chases after Aki, Himeno, and Denji through the halls and they come to the elevator shaft where below the devil’s mouths are open wide for Denji to fall down into it. On the other side of the shaft are Arai and Kobeni who both want Denji to die to spare everyone else. They’re running out of time and they’re desperate.

Aki considers using his sword, but Himeno cautions against this because using it will cut out a huge portion of his life. Himeno uses her Ghost Devil powers to restrain him and apologizes to Denji. Arai comes and tackles Denji, then Kobeni comes at Denji with the knife. Aki’s able to break free from the Ghost Devil’s hold and jumps in front of the knife which cuts into him. Aki lays there bleeding and Himeno falls to her knees, remembering her fallen partners. Denji decides that he’ll jump into the Eternity Devil’s mouth and hopes that his chainsaw abilities will be enough to destroy this monster for good. The episode ends with Denji jumping in, and we’ll have to wait for the next episode to see how that goes.