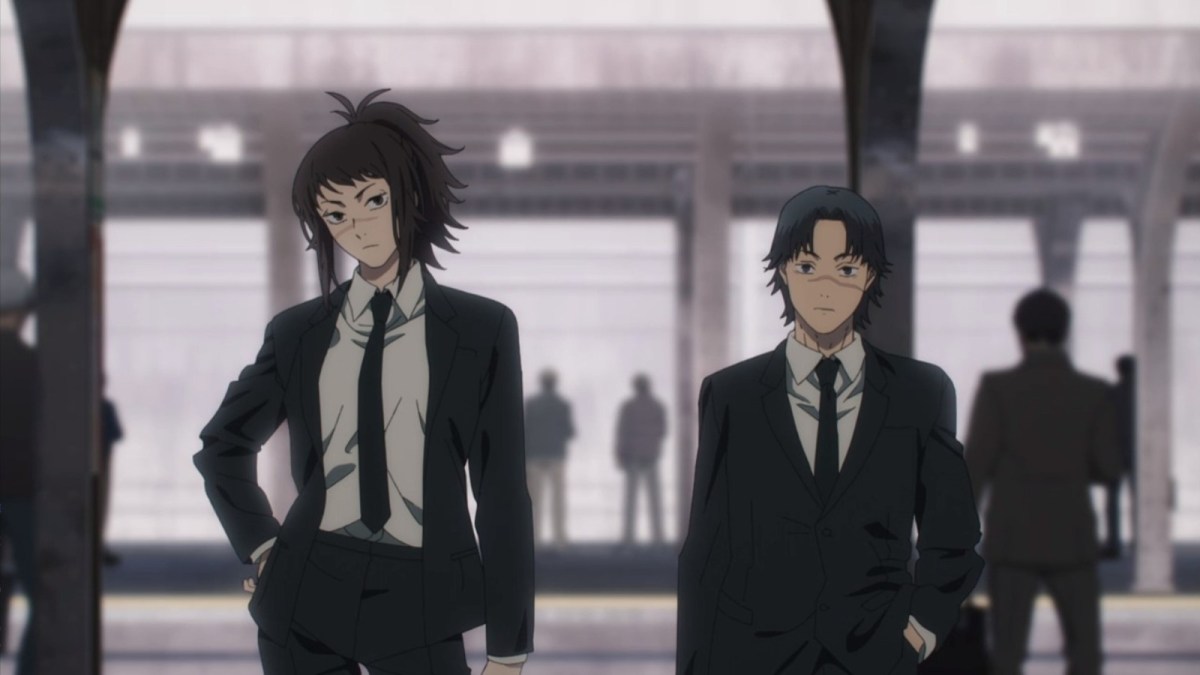 In Chainsaw Man, Tokyo is in a state of chaos and the Public Safety Devil Hunters have their hands full. Many people have died because of the Gun Devil’s influence, but Tendo and Kurose refuse to go down without a fight.

People all around the city are being killed by people with guns, and a special team led by Akane is sent to kill Makima. Makima’s riding in a train on her way to a lunch meeting with Kyoto bigwigs and she’s unhappy about it. Gunmen come on the train and shoot everyone down, but as they’re standing around conversing after the attack, a voice interrupts them. Makima wasn’t dead after all, she survived the attack and handily disposes of those who tried to kill her.

The train reaches the station and Makima is greeted by two devil hunters, Tendo and Kurose, who are shocked that Makima isn’t dead. She says that the blood on her isn’t hers and she didn’t get shot. Makima instructs them to clean up the mess and after she gets some new clothes, they’re going to work on solving this citywide panic.

Michiko Tendo is a tall woman who keeps her black hair tied in a messy ponytail and has a horizontal scar across her face. She, like Aki, has a history with the Gun Devil and it inspired her to join Public Safety. An important difference is that she never tried to destroy the Gun Devil herself because she didn’t think it was possible. Tendo gets a contract with the Punishment Devil, the devil that embodies fear and punishment, but the specificities of the contract aren’t known.

Yutaro Kurose has short black hair and like Tendo, he has a horizontal scar across his face that they got while fighting in the same battle. The Gun Devil ruined his life as well, and he joined the Public Safety Devil Hunters in response. The two have clear similarities, as Kurose also gets a contract with the Punishment Devil, but there are differences when it comes to their personalities. When the two are informed that the Special Division teams are under assault, Kurose asks if Makima is dead, but Tendo’s reaction is more callous. She feels like they’ve been wasting their time waiting around for her.

As mentioned earlier, Makima isn’t dead and they get to work. Kurose questions if they should go to Tokyo and fight against the attack, but Makima says they don’t have the time. She commands Tendo to secure the highest temple in the area and commands Kurose to gather 30 convicts with life sentences or worse from the Ministry of Justice. The two of them jump into action and complete the tasks with efficiency.

At the temple, Makima conducts her outrageously powerful ritual and launches attacks of her own from Kyoto. All the convicts are lined up and blindfolded, even Tendo and Kurose are blindfolded for this. Kurose asks about what she’s doing, and Tendo replies that lower-level devil hunters such as themselves aren’t privileged to know. Makima has the convicts repeat the names of the gunmen she wants dead and she performs poses that look peaceful in nature, and yet are anything but. Scenes depict the various gunmen in Tokyo flattening and exploding in blood and gates. In each case, black birds are nearby and represent an ominous omen.

Makima’s ritual is enough to weaken Akane and Katana Man, who defeated Denji. Akane summoned the savage Snake Devil to devour the Ghost Devil and kill Himeno, while Denji couldn’t contend with Katana Man’s speed. Denji’s opponent used his Sword-Dash Draw to slice him in half. As they’re taking Denji’s upper half to their vehicle, Kobeni finds the two bad guys after experiencing a great loss herself and cuts off Katana Man’s arm. She uses a gun and fires back at them and they drive off in a frenzy, leaving Denji with Kobeni.

Tendo and Kurose really came through when it counted this episode. With their help, Makima was able to successfully destroy many of the gunmen who were threatening the city. Now that Special Divisions 1-3 have been absorbed into Special Division 4, these two will help train the surviving devil hunters to prepare for this war against the Gun Devil, Akane, and Katana Man.