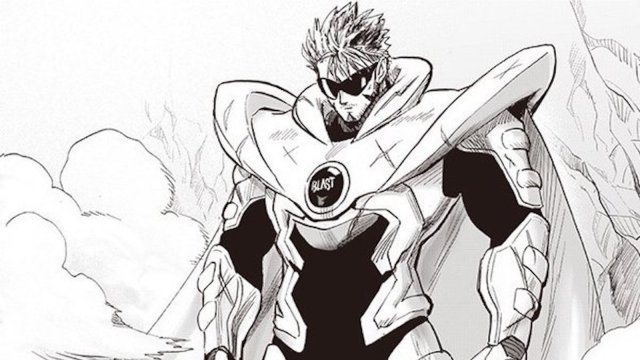 Following powerful monsters and villains on a supercontinent who cause chaos, anime fans have been on a wild journey watching One-Punch Man. Watching Saitama and Genos partner up and try to make their mark on the Hero Association has been challenging, especially given how tall that mountain was to climb from starting out low in rank.

One day monsters start attacking as several monsters from the Monster Association set their eyes on destroying the Hero Association. In the chaos of the melee two children are kidnapped and Satiama attempts to rescue the them in an intense moment of bravery. After, he meets someone he hasn’t encountered before named Blast.

Once this new Blast figure entered the picture, fans are wondering just exactly who this new mysterious character is.

Blast holds the title of Class-Rank 1 hero of the Hero Association, earning him the distinction of being the strongest, most powerful hero in the association. Blast was presented to fans as a member of a legendary group of guardians. These legends are tasked with locating the cubes of multiple Gods all throughout world.

The goal is to keep people from getting near these cubes, because if they are, they will become Mysterious Beings. Beyond this, Blast has also had some legendary battles in his day. During one such legendary battle he came up against Centichoro, a giant and one of the strongest centipedes in existence.

When the heroes attack the Monster Association’s home in an attempt to retrieve the children, Blast is able to complete another task — a mission he’d set out to accomplish after he secured one of the God cubes he was tasked to find. Blast has not made as many appearances as his primary focus is finding all of the cubes that he can.

As of now, it is unclear when fans will see Blast again. That said, fans will more than likely see this curious character at some point in the future, given how high up he is in the Hero Association, and considering that Satiama and Genos intend to ascend the ranks to such a position as Blast’s at some point in their lives.

Fans are able to watch Satiama, Genos, Blast, and all of their other favorite characters on One-Punch Man streaming on Hulu now.