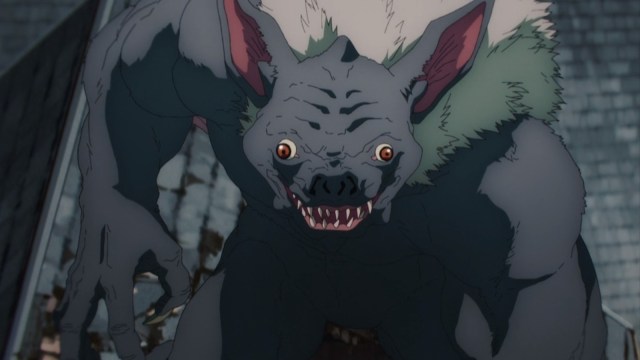 Chainsaw Man episode three ended with a climactic battle with the Bat Devil, but it ended in some unfortunate deaths.

In “Meowy’s Whereabouts,” Denji agrees to help Power find her pet cat Meowy who’s being held captive by a devil. When they arrive, Power knocks Denji out with a blood weapon and sacrifices him to the Bat Devil inside of a house. The giant Bat Devil has white hair, sharp teeth, and big claws, and embodies the collective fear of bats. He shows Denji the wound that his kind gave him, which forced him into hiding.

He plans to heal his wounds with human blood, but when he drinks Denji’s blood, it doesn’t have the desired effect. The blood tastes disgusting to him because Denji isn’t fully human, he’s part devil, and the Bat Devil consumes Meowy and then Power once she lets herself be eaten. The devil then flaps its wings and goes on the hunt for humans in the city, but Denji won’t let him go that easy. The Devil Hunter has grabbed onto his legs and is drinking his blood like a true bloodsucker as he flies through the skies. The Bat Devil grabs him and Denji pulls the pull cord on his chest and becomes the Chainsaw Man and slices his arm.

Denji falls back down to Earth and crashes through a building. The Bat Devil approaches him and they brawl in the street, which is really where we get to see this monster’s powers. Denji hits him out of the building, the Bat God punches the street and it creates a ripple effect that demolishes a building, and he throws a car at Denji and the hero catches it and throws it back. At one point, the Bat Devil uses his mouth cannon and Denji’s blasted with a powerful blast of air.

In the end, Denji stands as the victor he leaps high into the air and comes back down to slash through him. The monster lands and it starts raining his blood. Denji wins the match, but with Power and Meowy dead, the victory rings hollow.

In the manga, the Bat Devil kept the caged Meowy on a chain around his neck. He had a hunger specifically for children, but in the anime, he shows a wide variety of “flavors” he’s interested in. He’s in a relationship with the Leech Devil and it’s proof that some of these devils can actually show affection.