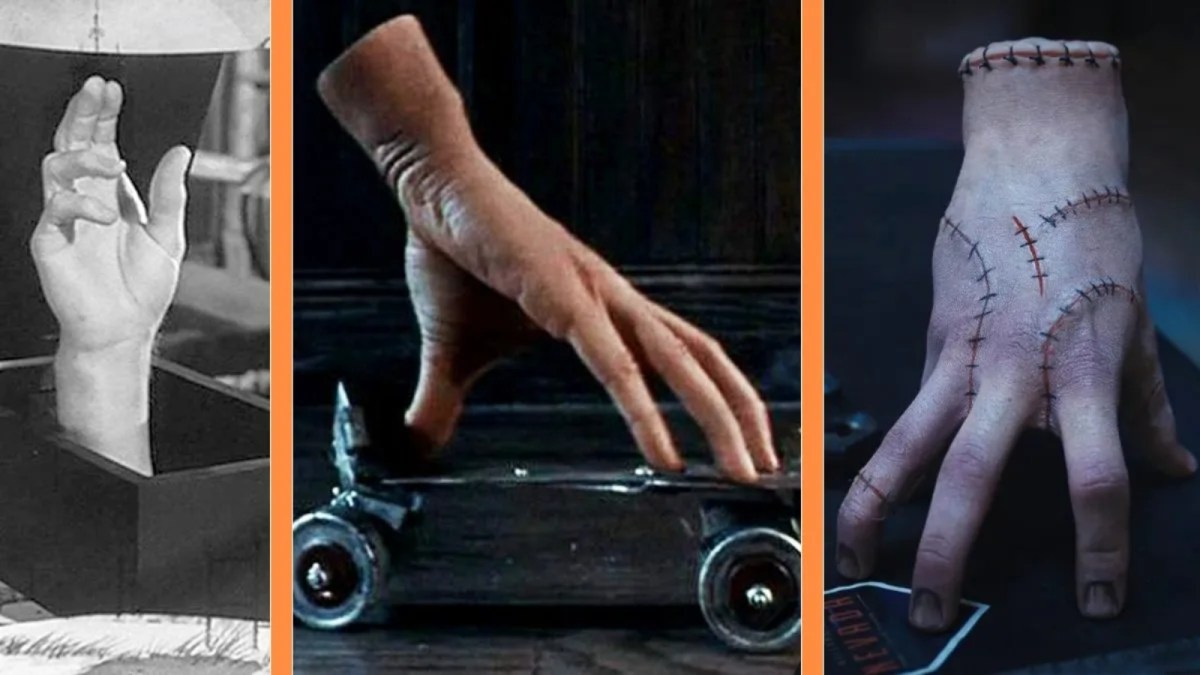 The Addams Family is one of television’s most beloved fictional families, with viewers finding a piece of themselves in the eccentric family with a penchant for the macabre. While the individuals in the family are all mysterious, none more so than the curious Thing T. Thing – otherwise known as Thing – created in the imagination of cartoonist Charles Addams in 1938.

The Addams Family’s regular helping hand is a disembodied hand that walks around like a spider. Early versions of Thing showed a hand or sometimes an arm peeking out from behind a curtain, from inside a box and other such oddities, but the 1991 TV series changed up the creature, revealing Thing’s full “body” is just a hand, usually shown helping members of the family by handing them things.

If you’ve ever wondered who could be portraying Thing, look no further. We’ve done the research so you don’t have to.

Every actor who came after Charles Addams has this mad genius to thank for creating the literal hand on the Addams family’s shoulders. Addams’ first Addams Family comic was published in The New Yorker on Aug. 6, 1938.

“I suppose, to be remembered as a good cartoonist is all I ask.”

Ted Cassidy was best known for his role of Lurch, the Addams family butler, who resembled Frankenstein’s monster, but he also had the very “hands on” role of Thing. While the series credited Thing as “Itself,” it was mostly Cassidy’s hands stealing the scenes, making him both the largest and smallest characters on The Addams Family.

Whenever Lurch and Thing had scenes together, assistant director Jack Voglin would provide his own hand to the much-beloved TV series.

Magician Christopher Hart made his big screen debut as Thing in The Addams Family movie in 1991. All the scenes of Thing running around the large Addams family home, driving a car and saving the day were done by Hart, who somehow gave the hand a personality.

When asked about how he gave Thing a personality of its own, Hart told Kimberly Quigley of The Red Booth that he had to come up with ways to make Thing expressive, which is difficult for something that has no eyes.

“The script would say: ​‘Thing scampers to the door. Thing runs across the street.’ That’s all it said – it didn’t have any real direction, so I would have to come up with funny ways to slide or maybe act like a happy little puppy.”

Even though Hart brought a fresh take to the role of Thing, not everyone was a fan of changing the original hand and arm that was possibly attached to a creature, to a disembodied appendage. Barry Sonnenfeld, director of The Addams Family movie, described the change as freeing Thing from its box.

“We’ve taken Thing and allowed him to leave the box, so our disembodied hand crawls throughout the set like a pet,” Barry Sonnenfeld said.

Steven Fox portrayed Thing in the short-lived TV series The New Addams Family. The sitcom followed the hijinks of the quirky family, including Thing. Like Hart, Fox gives Thing a lot of personality, as highlighted in a special episode called “Thing is Missing,” where Thing runs away from home when everyone forgets his birthday.

Making his acting debut, illusionist Victor Dorobantu lets his fingers do the walking and talking in the new Netflix series Wednesday, which quickly took the streaming provider’s number one spot in its opening week. In the series, Wednesday (Jenna Ortega) has been expelled from her public high school and is forced to enroll in the Nevermore Academy, a private school for misfits and outcasts like Wednesday.

In the series, Thing has been tasked to keep a watchful “eye” on Wednesday, but quickly teams up with her to help her escape the dreaded place. Wednesday gives Thing a lot of screen time and does a great job of making him part of the story, not just there for giggles.