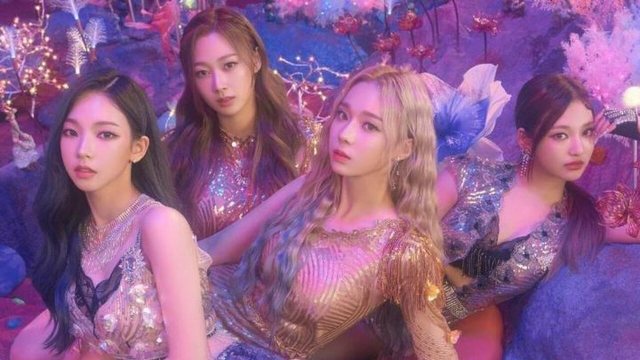 Aespa is a K-Pop girl group that debuted under SM Entertainment in late 2020. The group made their official debut with four members: Giselle, Ningning, Karina, and Winter with the debut single, “Black Mamba”. The song charted on several platforms and earned the group their very first music awards show win. In April 2022, Aespa performed at the Coachella annual music festival, and signed with Warner Records in June.

Yu Jimin, popularly known as Karina, was born on April 11, 2000, and is 22 years old. She stands at 167.8 centimeters (five foot, six inches) tall. She is a singer, dancer, leader, and the face of the group. Her stage name was inspired by her baptismal name, Katarina. She attended Hansol High School before dropping out to focus solely on her idol activities. She was scouted for auditions by an SM Entertainment staff through a direct message on Instagram. Karina was a trainee for four years before she made her debut in Aespa, and had her second debut as part of the supergroup, Got the Beat, in 2022.

Kim Minjeong, also known as Winter, was born on January 1, 2001. The 21-year-old singer and rapper is 165cm (five foot, five inches) tall. Winter attended Yangsan Girls’ High School but dropped out and instead obtained her GED. In 2016, she was scouted at a dance festival in Yangsan by an SM casting director and was a trainee for four years and six months before she debuted. Just like fellow Aespa group member Karina, Winter also debuted as a part of the supergroup Got the Beat in 2022.

Ning Yizhou, popularly known as Ningning, was born on October 23, 2002, and is 161cm (five foot, three inches) tall. She is a vocalist and the youngest member of the group. Ningning is one of two foreign members of the group as she was born in China. She attended the Beijing Contemporary Music Academy, and although her childhood dream was to become a painter, Ningning passed the SM auditions and was a trainee for five years before her debut.

Uchinaga Aeri, also known as Giselle, was born on October 30, 2000, and is 21 years old. She stands at 164 cm (five foot, five inches) tall and is a rapper and vocalist in the group. The second foreign member of the group, Giselle is a Japanese National but was born in South Korea. She attended Tokyo International School and Sacred Heart School in Japan and took vocal and dance lessons at an idol training academy for two months before she auditioned. After passing the SM Entertainment Saturday Open Auditions in 2019, she joined the agency as a trainee where she trained for 11 months before making her debut.