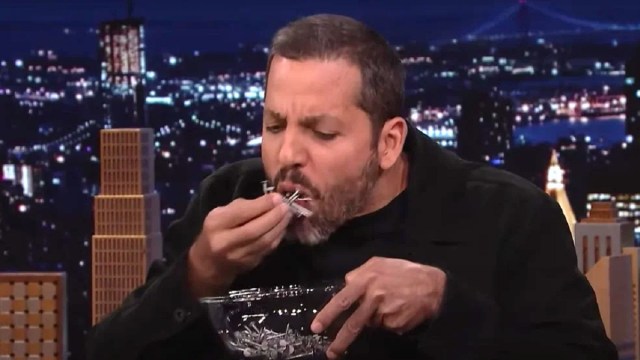 Thursday night on The Tonight Show starring Jimmy Fallon, he fooled the host and the audience with his first trick, only to freak them all out with the second.

The master magician and trickster did a lengthy card trick initially, in which he decided to make Fallon nearly panic when he used his hand to smash a pin on his desk. Doesn’t sound too scary and, well, it isn’t. However, the host would apparently disagree.

The trick ended with Fallon’s card stuck on his hand, and it just so happened to be the same card that every audience member chose based on a random number earlier.

However, the real trick was the bowl of nails that Blaine decided to eat. The crunchy meal made Fallon begin to freak out. It did for us, too , though only because he didn’t add seasoning.

While Blaine ate the nails, you can see him grabbing a bunch of them and then naturally letting some fall out of his mouth due the messy way he eats them, reminding us of how the Cookie Monster eats cookies. Clearly he wasn’t actually eating them. Or was he?

Turns out it doesn’t matter, because Blaine dude decided to start spitting nails out of his nose! You would NOT want to be around when this guy sneezes.

He wasn’t done there, not by a long shot. No, he didn’t start crapping nails (painful!) but he did start regurgitating them (it so appeared). He coughed one out. He spit some out. And then it happened. The ending. The very last moment to freak us all out.

Blaine spit a live frog out of his mouth. This man who eats like the Cookie Monster spit out Kermit.

The audience, Fallon, and the Roots, were all freaked out. We join them in their sentiments. And thus concludes David Blaine’s appearance tonight on Fallon.

It’s worth noting that Blaine was there promoting his new Las Vegas residency. Starting September 30, you can see David at the Theatre at Resorts World Las Vegas. You might even see his frog, too.