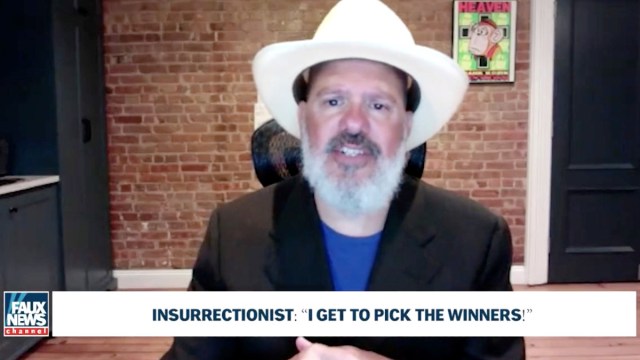 The state of politics in America leading up to the 2022 midterm elections is … well, we don’t have to tell you. Trump-endorsed picks such as Dr. Mehmet Oz and Herschel Walker are running tight campaigns against Democrats in swing states, and if the GOP manages to wrestle back the Senate we can all say goodbye to fundamental rights when it comes to reproductive health and the LGBTQ+ community, just for starters.

And because things are so crazy now, the internet barely blinked an eye when a parody video from a pro-democracy Super PAC starring comedian David Cross went viral on Tuesday, because the parody was simply that good. Or, because Republicans are just that unhinged. Take your pick — either way we all lose!

Now, Finchem — who participated in the insurrection on Jan. 6, 202,1 and is likewise a member of the Oath Keepers militia group — is indeed running for Secretary of State in Arizona. But this ain’t him!

“Look, I was there on January 6,” Cross tells Carlson in the decidedly shallow-fake video, which even includes a “Faux News” graphic. “When Donald Trump personally asked me to run for Secretary of State, my first reaction was: ‘Pardon me?’ Literally, when he said he would pardon me if I helped him win, I was like, ‘I’ll do it.’ Well, the Secretary of State counts the votes, and uh, if I win I get to pick the winners!”

“And look, we all know that Huge Chavez and ANTIFA have been messing with voting machines, and we need someone to spend millions of dollars in taxpayer money that we can prove it,” Cross continued. “And that’s me! And the other Republicans running for Secretary of State across the nation — I mean, Trump endorsed us all — Arizona, Nevada, Michigan, he loves us all. He says we’re perfect.”

The ending of the video even had a message encouraging viewers to vote for progressives, as well as some fine print that reads: “Mark Finchem is depicted by a parody actor, but he is an insurrectionist who would miscount votes. Tucker Carlson is a parody based on his own coverage.”

Yet, people were still fooled. Not long after Chapman’s video went viral, Cross began trending on Twitter because folks couldn’t believe that it wasn’t him, despite the fact that it most certainly is. (Chapman also knew the video was a parody, as evidenced by his cheeky replies to those who jumped into his mentions, but that’s neither here nor there.)

Still, plenty of others saw right through the bit — though it doesn’t hurt that Cross and Finchem look virtually nothing alike.

Unfortunately, the rhetoric Cross was spouting in character is barely parody, as Finchem has said himself that he plans to crack down on nonexistent election stealing. And, as anyone with an ounce of common sense knows, this is just an excuse for the Republicans to steal elections for themselves. With three more weeks until Election Day, it seems as though things are about to get real dicey.