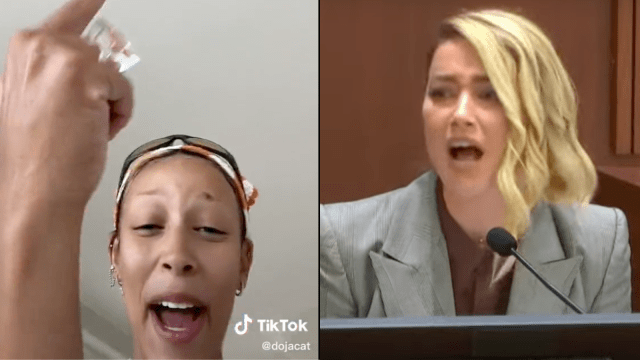 Doja Cat, fresh off her recent controversies over wanting to date Stranger Things star Joseph Quinn, has decided to keep up the controversies by mimicking Amber Heard.

Because the world hasn’t seen enough content being made out of the harrowing and all-encompassing Depp-Heard defamation trial, Doja Cat has decided to pitch in, utilizing a famous moment from the trial for meme value on TikTok. Quoting the “my dog stepped on a bee” testimony from the court room in a new TikTok, it’s not had a universally positive reaction.

Yes, her dog did indeed step on a bee.

Her stans are not entirely sure how to feel, with some defending her by saying that Heard’s testimony was so ridiculous in the first place it’s hard not to parody it. Others feel it’s more unforgivable, and have posted the entire original testimony to show how Doja’s TikTok can come across as highly insensitive.

Many, many other people of note as well as average internet citizens made memes out of the trial, in particular of the more shocking moments, and believe there’s a double standard that only Doja Cat is being called out for being “problematic”.

Her calling out 17 year-old actor Noah Schnapp for posting direct messages online also fuelled another type of response to her TikTok, saying she may not have her priorities straight on what is important. Maybe this is the real “borderline snake shit”?

The most damning comment of them all though, is comparing Doja Cat to incels. Yes, you read that correctly. The beautiful thing is none of them words have any meaning to a Victorian child.

Doja’s PR team must be working overtime, that’s if they were working at all. A reminder that it’s okay to sometimes just not post anything on social media, especially if you’re a massive celebrity.

Who knows what comes next for the musician, but it’s sure to be controversial if she keeps using her TikTok.