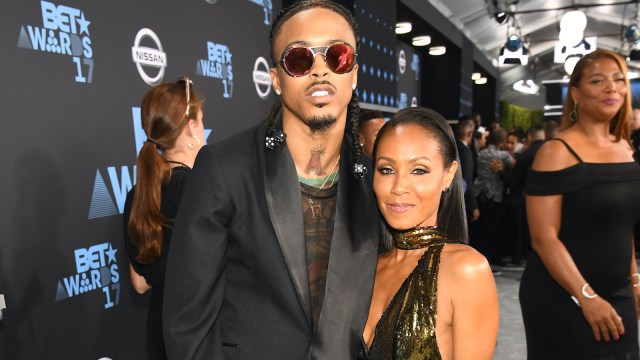 Singer August Alsina raised more than a few eyebrows during the Monday night finale of VH1’s The Surreal Life in which he made a heartfelt speech that implied he was in love with another man. However, his fans aren’t sure the situation is as cut and dry as gay-or-not-gay.

In his private confessional, Alsina spoke to the camera over the melody of inspirational music, saying, “And then, what do you know, love showed up, but in a new way. I want to share that and really honor the person that I love and loves me back and is teaching me so much about love and healing. I want to do that in front of the world because it defies all of the constructs one would say love is supposed to be or love should look like.”

Alsina then gestured to somebody behind the camera, at which point a man entered the frame and sat down beside him. Alsina tells him, “I love you” and the two embrace in a hug.

Given his history of dating women, most infamously Will Smith’s wife, Jada Pinkett Smith in 2020, this new turn of events has surprised a lot of Alsina’s fans. Many have offered their congratulations to the 30-year-old singer. However, not all of them are convinced he’s gay or bi, or that the man in the video is actually his new boyfriend.

The identity of the man has not been confirmed but several believe him to be Zu, someone with whom Alsina has been spotted many times before and whom Alsina himself has referred to as a “brother.”

In his Instagram video from July 18, Alsina wished his mother a happy birthday, accompanied by the man fans assume to be Zu, who also called Alsina’s mother “Ma.”

Neither Alsina nor Zu has offered clarification on the matter, and some people are weary that his confessional was nothing but a rating ploy for The Surreal Life. If Alsina was simply referring to platonic love then more power to him, but there’s no question that the video was edited to appear otherwise. If it was a ratings ploy, it’s understandable why fans — especially members and allies of the LGBTQ community — would be upset.

That being said, Twitter user @geeondruh summed the situation up nicely by saying whether or not Alsina is gay or has found love in another man, romantic or otherwise, he’s clearly on the path to emotional recovery, something followers of the singer know hasn’t come easily. He should be commended on that, and allowed the space to come forward with an explanation should he choose to do so.

Season eight of The Surreal Life has yet to be announced. If or when it does, Alsina’s newfound love will surely take center stage.