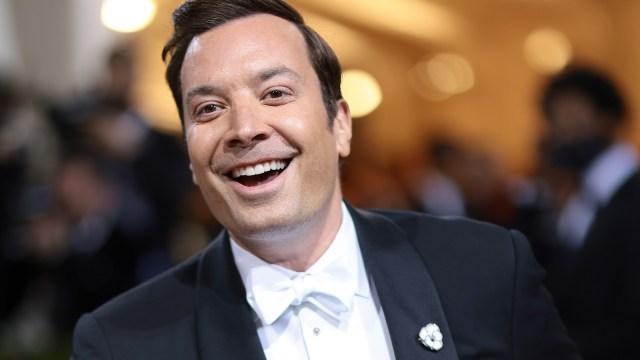 Photo by Dimitrios Kambouris/Getty Images for The Met Museum/Vogue
Review of:

Comedian Jimmy Fallon made a spirited return to his talkshow after false reports that he had passed away went viral on Twitter.

The host of The Tonight Show with Jimmy Fallon danced his way on to the stage, singing, “I’m alive/I’m not dead/That’s what I said,” as The Roots played a gospel melody and a choir echoed the refrain.

Fallon took the opportunity to crack a joke about the new Twitter Blue verification subscription, telling the live audience:

“Ladies and gentlemen, I’ve been to the other side. I’ve seen the pearly gates. I paid $8.00 for that blue check mark in the sky!”

Since Tuesday, the funnyman has been the focus of an online death hoax. It started as an off-color joke among some ironic Twitter users who were facetiously posting images of people other than the comedian under the hashtag #RIPJimmyFallon.

Several international news outlets published the gag as a scoop without fact checking the tweets, and the #RIPJimmyFallon hashtag went viral as a result.

Fallon personally reached out to Twitter’s freshly minted CEO Elon Musk to request the removal of the hashtag from the social media platform.

Musk attempted to taunt Fallon with a third tweet asking the comedian to confirm his identity. Unsurprisingly, Fallon has yet to respond to the mogul’s playful jab. Instead, he seems content to have taken matters into his own hands with his vibrant opening on The Tonight Show.

Fans can rest easy knowing that Fallon is alive and well. However, the incident is another example of how Twitter continues to permit the wanton distortion of facts without oversight.