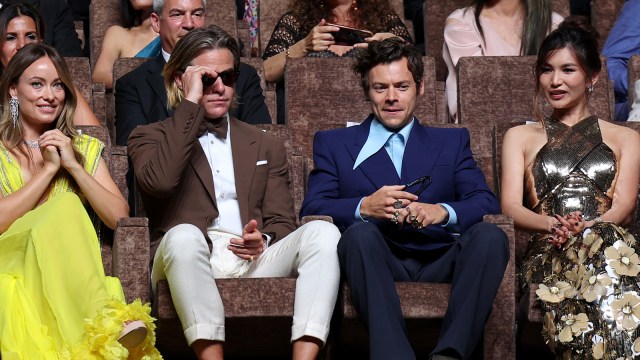 In a turn of events that surprised everyone, the Venice Film Festival has become one of the most meme’d events of the year thanks to the appearance of Don’t Worry Darling and its cast.

Coming to a head at the event, the drama that has gone on throughout the film’s years of production was taken to a new level. Everything peaked with Spitgate, the video that showcased Harry Styles seemingly spitting on his co-star Chris Pine and the internet has done exactly what you’d expect turning this into a masterful meme.

Some of the best edits of this clip have appeared in the last two days as creatives use their skills to make the situation even wackier. Some of these opted to add new props into the already strange clip, while one of the most popular simply turned Styles himself into a spitting dinosaur.

The clip crafted by VFXandChill works perfectly thanks to Pine’s strange gestures as Styles takes his seat and the quality of visual effects is spectacular.

Quickly fans realized that the clip doesn’t even need to involve spitting to be hilarious as a new edit surfaced courtesy of Goat Simulator where Styles presents Pine with the gift of a goat before taking his seat.

Spitgate continued to dominate social media following the event despite a representative for Pine spoiling the fun and sharing that Styles did not actually spit on him. Fortunately, Styles himself embraced the meme taking the stage earlier this week joking to the crowd that he had in fact spat on his co-star.

If all of this content has got you hyped to finally see the film there isn’t too much of a wait. Don’t Worry Darling will arrive in theaters on Sept. 23.