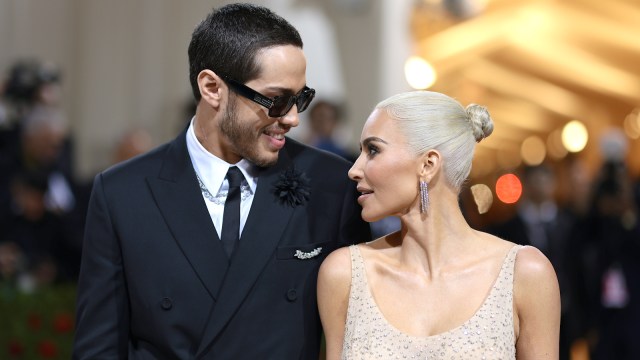 Since the former SNL star and Kim Kardashian made their relationship public, it was only a matter of time until her name found its way onto his skin. The 28-year-old is known for his numerous tattoos, but as it turns out, there are more creative ways to immortalize someone than with just a tattoo.

In an interview with Ellen DeGeneres, Kim shared that she loves Davidson’s tattoos, and thinks they are “cute”. When asked by Ellen if he has three tattoos of her she said, “well, a little more than that.” Until recently, we didn’t know exactly what those tattoos were (or where), but a new Instagram photo from Kim sheds some light on the matter. Here’s a list of the Kim Kardashian tattoos Pete Davidson has, including the famous “Kim” branding.

Pete Davidson doesn’t have the best relationship with Kim’s ex-husband, Kanye West. In a reportedly leaked text exchange between Davidson and West, the former SNL star reportedly bragged about being “in bed with your wife”. It was from this leaked exchange that we got a photo of Davidson and the first signs of a tattoo of Kim. Below his collarbone, just above his chest, the name “Kim” in all capital letters is visible. It was believed to be a tattoo at first, but as we later learned, Davidson chose to immortalize his relationship with Kim with a more permanent method.

Of course, we’re talking about the famous “Kim” branding, which was confirmed by Kim in her interview with Ellen DeGeneres.

My girl is a lawyer

Next up is Kim’s favorite – “My girl is a lawyer.”

Until recently, this was the only real tattoo we knew of. The image was posted by Kim on her Instagram, and in it Davidson can be seen taking a selfie in the middle of the ocean with Kim standing on a surfboard in the background. Right above his left collarbone is the tattoo “My girl is a lawyer.”

Kim has been open about her journey to becoming a lawyer and shared back in December 2021 that she passed the “baby bar exam”. That exam is also known as the First-Year Law Students’ Examination, which is a bi-annual test that lasts one day. According to The State Bar of California “it consists of four one-hour essay questions and 100 multiple-choice questions.”

This tattoo pays homage to the first time the pair kissed back in October 2021 when Kim hosted Saturday Night Live. The kiss happened during their skit, in which Kim played Princess Jasmine from the Disney movie Aladdin and Davidson played Aladdin. From that point on, it was, as they say, a whole new world.

This last tattoo came courtesy of the same photo that brought us “Jasmine and Aladdin”, although it’s not as clear-cut as the former (or maybe it is). A line above the previous tattoo is the acronym KNSCP which likely refers to the first letter of Kim and her children’s names: Kim, North, Saint, Chicago, and Psalm. This hasn’t been confirmed by Davidson or Kim, so we’ll have to keep our eyes out for an interview with either, but until then it’s clear Kim wasn’t joking when she told Ellen DeGeneres that Davidson had “a little more” than three tattoos.