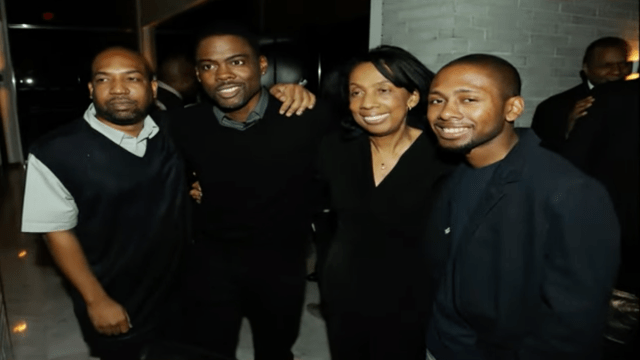 The infamous Oscar slapping incident has put Chris Rock on the map of numerous talks and curiosities besides the subject that surrounds the waning relationship between him and Will Smith.

While everyone is aware of Rock’s discernible position as a stand-up comedian and actor in the Industry, a very similar nature of interest has been stretched to his personal life and family.

Born in 1966 in South Carolina, Rock has managed to carve out a successful position for himself in Hollywood after making his debut appearance in the movie Beverly Hills Cop II and eventually making his way into the renowned Saturday Night Live.

Following his much-recognizable role as a comedian, he featured in HBO comedy specials such as Big Ass Jokes, which won a CableACE Award. He is believed to maintain a quite harmonious relationship with his family and siblings in particular. He has a total of seven brothers and sisters and some of them managed to follow a path of stardom and fame just like him. Let’s throw some light on Rock’s very special family members.

It is well-known that comedy runs deep in the blood of the Rock family. Chris Rock is not the only member of his family who has encountered stardom and success, as his younger brother Tony also journeyed along the same path.

He was born in 1974 in Brooklyn, New York, and is regarded as his most famous sibling. Like Chris, Tony is also a successful stand-up comedian. He is believed to have been catapulted into the world of stardom in 2001 when he starred in Me and My Needs.

However, he is well-known to the audience for his role as Dirk Black in All of Us and also appeared in quite a few Howard Stern interviews. Before acquiring fame, Tony spent his early 20s as a stand-up comedian and got his first work in Can You tell? as a game show host.

He opened up about pursuing comedy in a 2008 interview where he mentioned some of the challenges that he had to face walking in his brother’s footsteps. Tony told The Washington Post, “I’m not afforded the luxury of just taking a set casual, taking the night off.” He added, “Because if I bomb, it’s ‘Oh, he’s not funny — he’s just doing it because of his brother’”. This proves how being a younger brother of a celebrity posed a challenge for him in the process of career-building.

Tony Rock was in the news again and this time in his response to Will Smith’s action at the Oscar ceremony. It’s clear that I am Legend star’s physical assault during the award ceremony that is continuing to acquire a lion’s share of media attention was not taken in the right spirit by the younger brother, who took the opportunity of a stand-up act to express his disapproval.

He slammed Smith, saying, “If you walk your a– up here, you ain’t nominated for s–t but these motherf–ing hands,” Tony told his audience. “I didn’t want to start the show like that!”. He added, “You gonna hit my motherf—- brother because your b–h gave you a side-eye?”

Besides the public outburst, Tony also said that Jada Pinkett Smith’s relationship with the late 2Pac might be the cause of the infamous Oscar Slap. In an interview regarding the subject, he went on to say, “I think that [Oscar Slap] was the accumulation of him being slapped on other levels,” he proceeded to add, “He said it himself, he always hated the ‘soft moniker.’ He’s soft, Jada won’t let 2Pac die, it’s always something about 2Pac and his daughter [Willow Smith] brought up 2Pac. And I’m not bringing up family stuff that people don’t know… this is stuff that everybody knows.”

Fame has left its mark on Jordan Rock, Chris’ other younger brother born in 1991. At the age of 31, Jordan has continued to retain his position as an established stand-up comedian and actor. He dropped out of high school and moved to New York to pursue a career in acting and comedy.

He appeared in interesting works such as HBO’s Love Life and Big Time Adolescence opposite Pete Davidson. He has been frequently eulogized by his family members including his brother Chris who regarded him as the “hipster, cool kid, skateboard and wise beyond his years”.

His works — especially in the arena of comedy — are primarily directed at the younger crowd, mostly millennials where he pokes fun at his siblings for following the goals of acting and comedy by using his trademark phrase, “I’m Jordan Rock. I’m the younger brother of Chris Rock. You guys have probably never heard of me. Because I’m the Solange of my family.”

However, this savage jab is balanced by his incredible support for his brother and a scathing response to the Oscar slap incident.

Even though he did not post any comment or make a public remark on the subject, he expressed his opinion on the issue by retweeting a comment from Tom Cassidy, who talked about fighting Carlton, a character from the sitcom The Fresh Prince of Bel-Air in which Will Smith starred as a major character and which had shaped his career.

Unlike his siblings, Kenny Rock is believed to maintain a perfect balance between staying in and out of the spotlight. Born in 1979 in Brooklyn, Kenny took utmost advantage of his capabilities and talent when he was confronted with his potential acting career.

This was successfully actualized with his appearance as well as remarkable performance in movies such as Vesuvius in 2014, Hope a Brooklyn Story in the same year and Coincidental Killers two years later. He maintains a warm relationship with Chris and this was proven on various occasions.

In 2020, he shared their selfies on account of Chris’ birthday with hashtags “brotherly love,” “black comedy,” and “family first.” The fact that these are not just mere words is evidenced by his criticism of Will Smith’s behavior at the Oscars.

Kenny expressed his doubts regarding Smith’s apology and said, “I don’t think it was genuine. I think his publicist and the people that work under him probably advised him to do that.” He also went on to state that watching the video “eats” at him. Initially, he thought that it was staged but eventually saw the severity given the verbal abuse hurled at Chris by Smith following the slap.

It is true that Chris is the eldest member of his immediate family but he also has an elder paternal half-brother named Charles Ledell Rock who died in 2006 at the age of 53 from alcoholism. Charles was born in 1953 to a former partner of Julian Rock.

Not much is known about Charles Rock except that he maintained a somewhat close relationship with Chris, who paid for him to go to rehab. However, his stay at the rehab was cut short after which his condition deteriorated further. He might not be the most recognized or prominent member of the Rock family but he certainly surpassed his brothers in terms of educational qualification.

The National Enquirer stated that Charles had an MBA and was the only kid in the family to have received a college degree. Unfortunately, his life toward the end was not a promising one due to his excessive alcoholism and a highly compromising financial condition. He lived in a homeless shelter and eventually died penniless.

The family’s penchant for acting and comedy cannot be discerned in Brian Rock. Brian, unlike his brothers, has chosen as well as managed to avoid the spotlight. He is rarely seen in any public event except as a part of his brother’s group picture. There is no social media account proving that he has been successful in living a less stressful life unlike his brothers.

Andre Rock, like his brother, has avoided the public platform exclusively reserved for the renowned artists of the industry. He is successfully living a private life and not much is known about him apart from his professional identity as a businessman.

The youngest and the only sister of Chris Rock was born in 1985 in Rock Hill, California. She was born in 1985 and is currently working as a therapist for children. Andy, like her half-brother, has also acquired an educational degree as she is reported to have attended Georgetown High School and later graduated from Winthrop University. Despite being active on social media, Andi has also managed to keep herself away from the relentless spotlight.