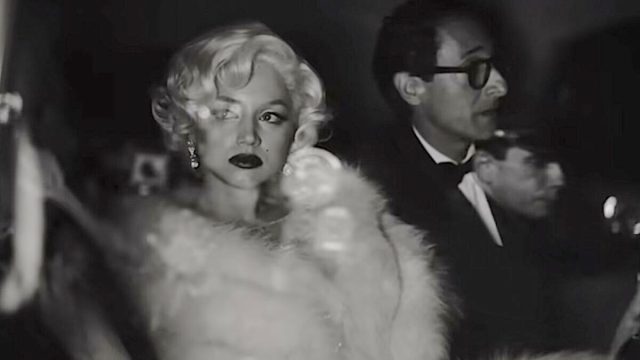 Ana de Armas channels Marilyn Monroe perfectly in the newly released biopic of her life now streaming on Netflix. But what is this movie actually about? With all of the documentaries that have been made concerning her and the movies that have promised to show fans what it was like to be her, Blonde takes a twisted turn down the dark sides of her life and it is mercilessly relentless. Based on the novel of the same name by Joyce Carol Oates, the film gives imagery to the fantasies curious enthusiasts have craved to see for decades.

Marilyn Monroe’s father is clearly the center of this story when her mother hangs a picture of a man over Norma Jean’s bed. She tells her daughter that it’s a picture of him and that she isn’t allowed to touch it with dirty fingers. The story is quick to show the declining state of Gladys Pearl Baker’s mental health, the role played by Julianne Nicholson. She drives her daughter into a raging fire and attempts to drown her in a bathtub because the nameless father had left her while she was pregnant and to her, that was Norma’s fault.

This theme runs throughout the movie with all the disturbing ups and downs the famous starlet endures. The novel that was written by Joyce Carol Oates is known as a fictionalized tale that stirred controversy because of the freedom she took in writing the graphic violent and very sexual scenes. Outraging many fans and satisfying many others, Norma Jean hides behind her Marilyn Monroe persona as she’s treated like a scarlet rather than the starlet she had become.

Did Marilyn ever get to meet her father?

Is there truth to the love affair she shared with both Charlie Chaplin Jr. and Edward G. Robinson Jr.? How did Joe DiMaggio react when she filmed the infamous white dress scene in her 1955 film The Seven Year Itch? Did she really have an affair with John F. Kennedy?

In directing the film, Andrew Dominik took his cues from Oates and went into graphic detail about what she was required to do to land her first role and those details don’t shy away when she is escorted in to spend time with the president. While she refers to all of her lovers as “Daddy,” she keeps waiting patiently on promises from letters sent anonymously to her by a man claiming to be him.

Living in a gorgeous home in Brentwood, California, she was worth in today’s estimation about $8 million. She had fan letters pouring in every day from girls wanting to be her and men wanting to be with her. But according to Blonde, she was never really happy. The movie does a good job at addressing her daddy issues, but it teases any actual revelation.

Marilyn Monroe put on a great act for her public. But as you’ll soon see when you watch the movie, that was all it was. Just an act.