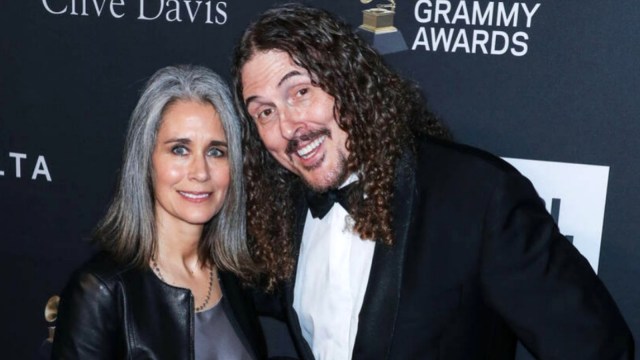 The release of Weird: The Al Yankovic Story has attracted the interest of numerous fans who are set to acquire more information about the popular comedy musician. Starring Daniel Radcliffe, the movie is all set to showcase the well-known version of Weird Al Yankovic despite some tiny variations from reality.

A substantial proportion of eager viewers, along with the newly acquired fans, however, are less interested in Yankovic’s professional success in musical parody and more in his personal life. Weird: The Al Yankovic Story has reportedly provided unsatisfactory answers to various aspects of the singer’s familial life that includes his relationship with his wife and daughter.

Yes, it’s true that Weird Al is married and has a daughter with whom the singer is believed to share a loving relationship. Let’s shine some light on this unexplored area of his life by gleaning the significant details about Yankovic’s married life and journey as a father so far.

Who are Weird Al’s wife and children?

Yankovic has been married for over 20 years to Suzanne Krajewski. The couple were reportedly set up on a date by actor and musician Bill Mumy. After that, they engaged in phone conversations for weeks before meeting in person during which he started to develop a crush on her.

Similar feelings were not reciprocated by Krajewski, however, who was unsure of continuing her communication with Yankovic. Speaking on the subject with Rolling Stone, she said: “Then I thought, ‘That’s kind of shallow of me to just be looking at a persona’. People are often so different than how they appear. And we clicked immediately.”

The couple tied the knot in 2001 with no intention of remarrying again. This was confirmed when he said to Wired: “I guess we did get married a little late in life, but neither one of us had been married before and neither of us intends to be married again. I enjoyed being single. But when I got married I found I was even happier, and when I had a kid I was even happier, still.”

She is also credited for making some glaring changes in the singer’s life after she donated hundreds of his shirts to Goodwill after the wedding. He confirmed this by saying: “She wound up wearing a few of the shirts I wore in high school, which I still had in my early 40s! And they fit her well; she looked great. She helped me stop hoarding stuff.”

With a seemingly blessed marital life came added responsibility in the form of fatherhood two years after their marriage. Their daughter Nina Yankovic was born on Feb. 11, 2003, and she shares an affectionate relationship with her parents.

Weird Al has established his mark as a doting parent when he talked in detail about his relationship with his daughter, especially her love for nature, and calls her an ‘ideal kid’. He said: “She likes playing outside, with animals and nature. I was always watching TV at her age. Where did we go right?”

The trio spends a lot of family time as confirmed by Nina herself: “We take out mini marshmallows and put them on sticks and roast them over a candle. It’s really fun. Sometimes an owl comes onto a tree and we look at him with binoculars.”

On Feb. 11, 2021, the couple celebrated their daughter’s 18th birthday. On the occasion of the great day, Yankovic shared a video of Nina, a little girl with her pet gecko on her nose on Twitter. He also commented: “Today marks the day my daughter legally becomes an adult. Sorry, this is the most recent footage I could find of her.”

It seems like one of the iconic comedy singers is clearly blessed with a blissful family life.