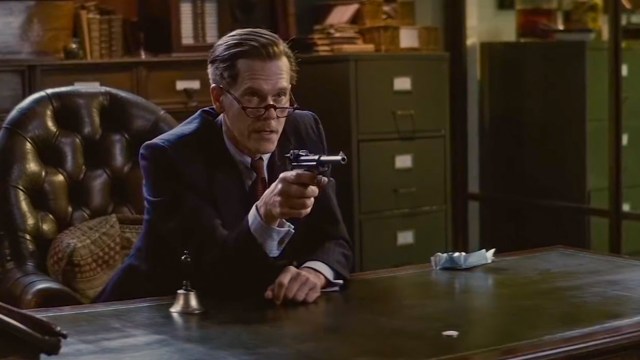 James Gunn created quite a stir when he revealed the trailer for the upcoming Guardians of the Galaxy: Holiday Special today. While the lion’s share of attention went to an adorable space dog, there was also another cameo in the trailer, one that Gunn calls his new favorite MCU character.

In addition to Cosmo, the trailer revealed that the Guardians want to cheer up Star-Lord so they cook up a plan to kidnap none other than acclaimed actor Kevin Bacon. Because of Star-Lord’s love of Footloose, we already know that Bacon is canon in the MCU.

Now Gunn revealed that Bacon is his personal favorite.

But the love doesn’t stop there. One intrepid fan asked Gunn what his three favorite Bacon movies were, and he replied in the context of the MCU.

“In the MCU? Footloose, Cocktail, and Eternal Sunshine of the Spotless Mind,” the director said.

Bacon, of course, hilariously only appears in one of those movies in real life. Cue the Footloose gifs!

Bacon is prominently featured in the trailer, with Drax (Dave Bautista) and Mantis (Pom Klementieff) showing up at the actor’s house. “We’re looking for the legendary Kevin Bacon,” they say before chasing the actor around his neighborhood.

Gunn told Entertainment Tonight back in July that in the special “We get all the holiday goodness that you would expect from a Guardians Christmas special with very little understanding of what Christmas actually is because they are in outer space.”

Bacon has previously expressed interest in joining the MCU.

“I’ve only played maybe two monsters, and one was a Mutant. If that’s what I’m playing, then it’s great. I play a monster as a human being,” Bacon told Comicbook.com, comparing his role in They/Them to his appearance in the X-Men franchise. “I was in one side of the Marvel Universe. Do I still have an opportunity to get into the other side? It’s a multiverse, right? I love that stuff.”

The Guardians of the Galaxy: Holiday Special premieres Nov. 25 on Disney Plus.