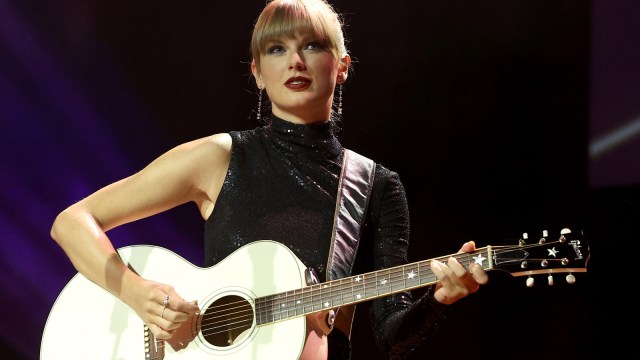 Late Night hosts have been coming up with some creative ways to introduce their guests as of late, and Jimmy Fallon is no exception. The star is known for his little gimmicks and skits with celebs, having started his career on SNL, and his most recent reveal was the perfect announcement for his Oct. 24 show, with Taylor Swift as his guest.

Fallon parodied Swift’s recent TikTok video where she revealed a track name from her upcoming album, Midnights, in a new series she’s calling, “Midnight Mayhem With Me“. In full retro glamor, Swift sat against a shiny velvet backdrop and used a “technologically advanced device” (bingo wheel) to randomly generate the number of the track name she would announce. The wheel delivered the number 13 ball with Swift then announcing, with the help of a red landline phone, that the name of track 13 would be “Mastermind.” All this was set to soft-playing elevator music and finished with a retro name card for the “show.”

Fallon did an excellent job of copying the artist’s video, minus the velour backdrop, and rolled his own bingo wheel to reveal that the date for the show would be Oct. 24 (which, due to the fact he has a strict schedule to keep to could not have been random). He then reached for his own red phone and said, “hello” to which the response was a “hey Jimmy” from Taylor Swift on the other end before the video then faded to his own retro name card.

Swifties will be hyped to hear the news, as this will be the artist’s first Late Night show since last year, and will come only a few days after Swift drops her tenth studio album on Oct. 21. Swift will obviously be there to promote her Midnights album which features a collaboration with Lana Del Ray, and – if it reaches number one on the Billboard 200 – she would tie with Barbra Streisand for most number one albums by a female artist, having already had 10 other releases reach the same position.

If you want to watch it as soon as it airs then you have to do as Fallon’s tweet suggests and tune in to his show, The Tonight Show starring Jimmy Fallon on Oct. 24, at 11:35 sharp.