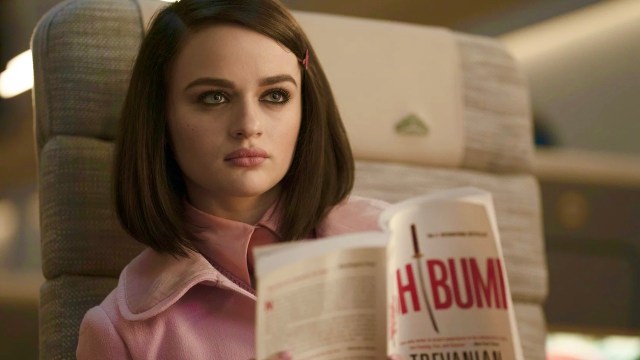 She may be just 23 years old, but Joey King has an extensive film catalog that rivals many that came before her. She has been acting professionally since 2008 when she was just 9 years old. King has starred in movies and television shows across a wide variety of genres. She has acted next to some of Hollywood’s biggest names, all while holding her own.

She rose to much more mainstream success and recognition by heading Netflix’s teen romantic comedy, The Kissing Booth, and its two sequels. Her most recent role in Bullet Train continued to show off her incredible range as an actress.

With so many roles ahead of her and a wide career in sight, the young star clearly has much to offer. Here are Joey King’s 10 best roles so far, ranked.

Wish Upon is one of few supernatural projects in King’s filmography, and it’s one of her best performances in a horror role. She stars as a girl named Clare who is depressed and traumatized. She receives a music box from her dumpster-diving father as an early birthday gift and discovers that the box can grant her seven wishes. Things seem to play out well for her as she begins to make wishes, but she soon comes to realize that for each wish to be granted, someone around her has to die. While the film was met with less than favorable reviews, King was praised for her brilliant acting performance.

While most period pieces tend to be in the drama or romance genre, The Princess is an action thriller. King’s character, only known as The Princess, is a badass sword-wielding fighter who sets out to save her family and kingdom when her home is taken by force by her jilted fiancé. The movie received some negative criticism due to its simple and weak plot, but many fans enjoyed the fun action scenes and cheesy dialogue.

The Conjuring is one of the most popular horror movies of the decade and is part of the highly successful film franchise. The original movie is set in the Perron household which is haunted by a malevolent spirit. The family calls on Ed and Lorraine Warren, a demonologist couple to help them get rid of the spirit. King plays Christine Perron, one of the children of the homeowners, and she gives a convincing performance in the role.

King plays a strong-willed activist factory worker in this adaptation of the story of the Radium Girls. She stars as Bessie, who works with her sister in a factory painting watch dials. When one of the girls dies and Bessie’s sister falls ill, they realize that the factory’s workers are being exposed to radium poisoning. Leading the charge, Bessie starts a campaign to take down the company.  Radium Girls was released to favorable reviews from critics, and King’s moving performance was lauded.

One of King’s most memorable roles was as Ramona Quimby in Ramona and Beezus. King stars alongside Selena Gomez, who plays her older sister, Beatrice. Ramona is a third-grader with an overactive imagination which often gets her in trouble but also allows her to make an adventure of any scenario she finds herself in. Ramona and Beezus is a feel-good family movie that has gained a ton of devoted fans till today, many of whom still consider it King’s breakout role.

King stars as a teenage girl dealing with the death of her boyfriend in The In Between. Tessa and her boyfriend were in a car accident. While he died, she survived, leaving her depressed and lonely. When she starts to see and feel him around her, she realizes that his soul is in a dimension called “the in between.” The movie is a tragic romance and, despite the mixed reviews from critics, King was praised for her gut-wrenching performance.

Netflix’s The Kissing Booth series is undeniably some of Joey King’s most recognizable work. She stars as Elle Evans in this teen romantic comedy. Elle is a teenage girl who falls in love with her best friend’s brother, which causes a strain on all the relationships involved. The Kissing Booth was fun and quirky and delivered on what it promised—a fun and lighthearted teen romance story. Many fans still agree that the first film in the trilogy is the most superior offering, and King’s acting received extensive praise.

Though primarily a movie star, Joey King starred in the first season of the black-comedy anthology series, Fargo, as Greta Grimly, the daughter of Gus Grimly and Molly Solverson, two cops in the town. The show was inspired by the movie, Fargo, created by the Coen brothers, and they came aboard the show as executive producers. The show has received multiple accolades and awards over its four-season run, and King’s role in the first season was well-received.

Joey King stars as The Prince, a manipulative and lucky schoolgirl, in this action comedy. Bullet Train stars an ensemble cast including Brad Pitt, Hiroyuki Sanada, Sandra Bullock, Bad Bunny, Brian Tyree Henry, Aaron Taylor-Johnson, and many more. The movie is set on a fictional bullet train in Japan where numerous assassins clash with one another when they realize their missions are all intertwined.  Even among seasoned acting talents, King held her own and delivered a stellar performance.

King’s role as Gypsy Rose Blanchard in Hulu’s true crime series, The Act, earned her nominations at the Emmy, Golden Globe, Critics’ Choice and SAG awards. King stars as Gypsy, a young girl who has cancer and lives with her overprotective mother. As Gypsy and her mother struggle with the young girl wanting independence, things take a dark turn. Gypsy finds out the secrets her mother has been keeping—particularly a case of Munchausen syndrome by proxy. The Act received extensive critical acclaim, and is widely regarded as King’s strongest acting performance.