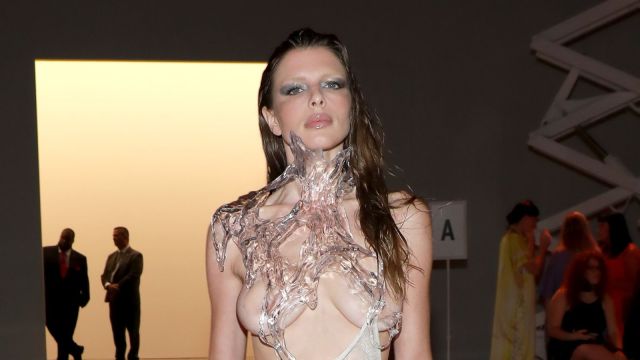 Photo by Jason Mendez/Getty Images for NYFW: The Shows

Julia Fox has wowed the internet with photos of her latest frock on the catwalk causing major outbursts of thirst online.

Fox had her breakout role in the anxious thriller Uncut Gems where she starred opposite Adam Sandler, but has since remained heavily in her original roots as a model. At the 2022 New York Fashion Week, she wore a series of astonishing dresses and served some immense looks on the catwalk.

By far the most outrageous and notable was her Little Mermaid-esque dress designed by WeiRan, which has sparked her fans to life. The dress was complete with a splash-like acrylic over her chest and neck, and an unbelievably camp mermaid tail. It is undoubtedly a look, and is in a similar vein to the Lady Gaga meat dress, or Fox’s own bizarre all denim outfit from a few months prior.

Fox’s skulk all rushed to give her love and praise, with many noting how tremendous she looks in the dress, and just as many wanting it for themselves.

It must be a massive coincidence this look debuted just a few days after the first peek at the live-action The Little Mermaid was shown at D23. We’re now thoroughly suggesting a “Into The Mermaid-Verse” film with Halle Bailey, the original animated version, and maybe just a sentient fish.

Fox was dating Kanye West during the pandemic, with her even saying the only reason they did so was to give people something to talk about. Even the biggest baller move of all-time, or she needed to cover up dating a man who posts erratically on social media.

The model will soon turn her attention back to acting with upcoming film The Trainer, which is due for release in 2023.