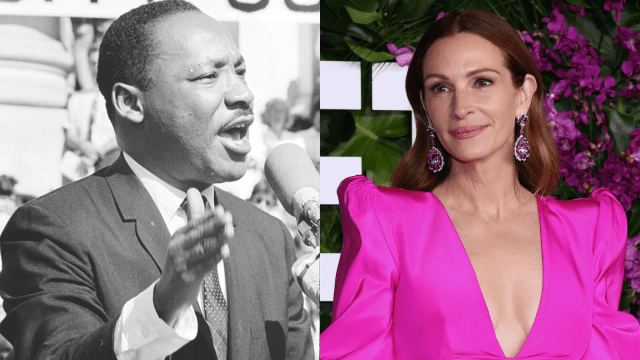 The world celebrated Julia Roberts’ 55th birthday a couple of days ago, and a startling revelation was made about how the beloved actress came into the world and the civil rights icon that helped.

The relationship between the two families kicked off when Julia’s parents, Betty Lou and Walter Roberts accepted the King family’s children into the Actors and Writers Workshop in Atlanta, when Black kids were still segregated from white schools, per Roberts’ conversation with CNBC’s Gayle King at a HISTORYTalks event in September.

The Roberts family’s decision to include the King children in their workshop led to retaliation by white supremacists, blowing up a car outside of the school when King’s daughter Yolanda was cast as a love interest to a white child.

The circumstances around Roberts’ birth and her link to the renowned civil rights leader Dr. King went viral recently when one of Barack Obama’s former advisers, Zara Rahim brought it to the attention of social media at large, as reported by Insider.

Julia Roberts has a history of being a public ally to marginalized groups, having called out racial injustice in a South Carolina town while filming Sleeping with the Enemy during an interview with Rolling Stone, per the Los Angeles Times.

Roberts recently starred in the romantic comedy Ticket to Paradise alongside George Clooney, and her relationship with Matthew Perry was also recently brought to the fore on the promotional circuit of Perry’s memoir, Friends, Lovers and the Big Terrible Thing.