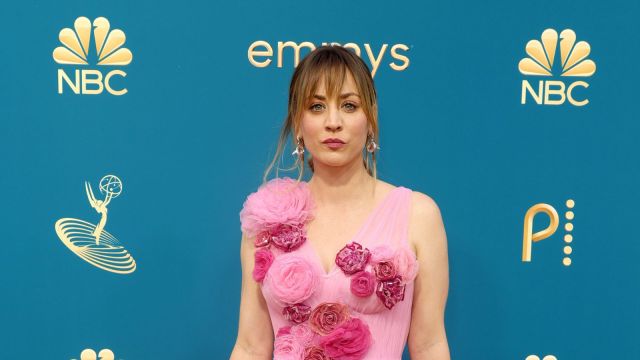 Kaley Cuoco has made her first public appearance with new partner Tom Pelphrey on the 2022 Emmys red carpet.

There’s never been a better time to show off your iconic looks, and with the Emmys here there’s a great excuse for the stars to bring out their best evening gowns. Cuoco decided not only to stun fans, but also bring out her new partner.

The former Big Bang Theory star went public with boyfriend Pelphrey in May 2022, and they’ve made a delightfully adorable entrance together on the crimson catwalk at television’s night of nights. She’s dressed like a winner as she awaits to see if she will take home an award for her performance in The Flight Attendant, but we know she’ll be a winner in her partner’s eyes either way.

Up in the stacked category of Outstanding Lead Actress in a Comedy Series for The Flight Attendant against the likes of Elle Fanning, Issa Rae, Jean Smart, and category favorite Rachel Brosnahan. Brosnahan has been a consistent nominee in the category since the first season of The Marvelous Mrs. Maisel.

Cuoco has been busy with her other big role in Harley Quinn, which recently got renewed for a further season on HBO Max. (Fans recently celebrated the character’s 30th anniversary.) Partner Pelphrey has had a star-studded few years, working on Academy Award nominee Mank with David Fincher, as well as on television series Guiding Light.

The Flight Attendant can be streamed exclusively on HBO Max, with the dark comedy originally based off a novel of the same name published in 2018.