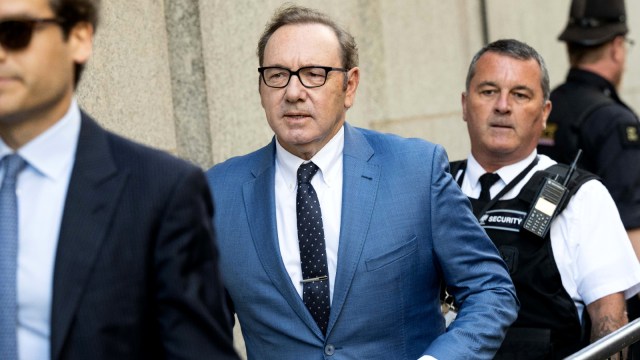 Actor Kevin Spacey pleaded not guilty to sexual assault charges before a judge in London’s Old Bailey courthouse on Thursday, which was pretty much expected since the 62-year-old previously said that he planned to defend himself against the charges.

Spacey was charged in May with four counts of sexual assault from incidents that occurred between 2005 and 2013 during his tenure as artistic director with the Old Vic Theater in London, in addition to one charge of causing a person to engage in penetrative sexual activity without consent. According to the New York Times, the latter charge involved “the penetration of a man’s mouth with a penis.”

“The actor’s appearance was largely procedural. During the hearing, the presiding judge scheduled a three-to-four week trial that will not start until June 6, 2023; the British judicial system is struggling to deal with a severe backlog.”

At a previous hearing, Spacey’s attorney Patrick Gibbs said that his client denied all the charges and was determined to “establish his innocence.” Spacey likewise vehemently denied all charges in a statement back in May.

“I very much appreciate the Crown Prosecution Service’s statement in which they carefully reminded the media and the public that I am entitled to a fair trial, and innocent until proven otherwise,” he told The Hollywood Reporter. “While I am disappointed with their decision to move forward, I will voluntarily appear in the U.K. as soon as can be arranged and defend myself against these charges, which I am confident will prove my innocence.”

The latest accusations are among dozens that have surfaced since Spacey was first accused of sexual misconduct by actor Anthony Rapp in 2017, who claimed that Spacey made sexual advances toward him when he was just 14 years old. Though he has yet to be convicted in a court of law, he was previously ordered to pay $31 million to MRC, the studio that produced his Netflix series House of Cards, for violating its sexual harassment policy.

In the interim, Spacey was granted unconditional bail and is permitted to work and travel before the trial takes place next year.