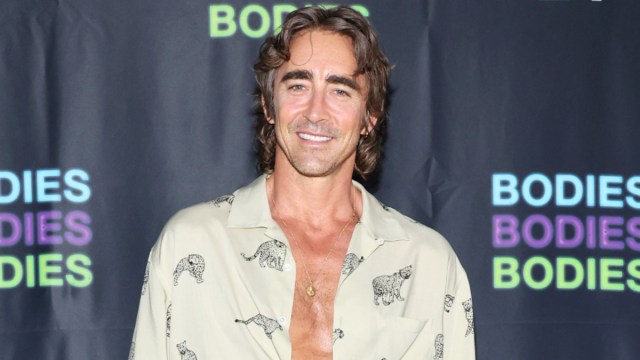 Actor and noted beefcake Lee Pace graces the cover of the August issue of GQ, which puts the six-foot-five chiseled hunk of marble into a black mesh, button-down style pocket shirt while boldly declaring: “Welcome to Lee Pace Summer.” The only thing we see wrong here is that summer is technically almost over — but we’ll take any amount of Lee Pace Summer is afforded to us.

Pace is currently having a moment, appearing in both A24’s horror-comedy Bodies Bodies Bodies and Apple TV’s Foundation, which has been renewed for a second season and will probably arrive some time next year.

And while there’s no occasion needed for a smoking hot Lee Pace photoshoot, it certainly isn’t hurting his recent trajectory — particularly online, where fans will take any and all excuses to thirst over the 43-year-old. And if he’s wearing a mesh shirt, even better!

Also swoon-worthy, Pace — who has always been incredibly private when it comes to his personal life — gushed about his marriage to fashion label Thom Browne executive Matthew Foley, who he was set up by a mutual friend a few years back.

“I said to my friend, Nick, ‘You know a lot of people, who do you have for me?’ And it luckily has worked out,” Pace says. He is ridiculously endearing when he describes Foley. “What I’ll say about being married, it was once described to me as an endless sleepover with your weirdest friend. In our experience, that is absolutely true,” he says. “If you’ve found one person you can be weird around, hold on tight.” A kid, or maybe a couple, might be in their future: “I’d love to have kids. I think there’s nothing better than little kids running around,” he says.

Pace likewise shared a few snaps from the shoot, tweeting: “BBQ AT MY PLACE. WHO’S COMING?” Don’t threaten us with a good time, Lee Pace!

So between the steamy photos and absolutely pure affection for his husband, the internet very understandably went into overdrive as both gay men and women had to fan themselves off — probably quite literally, in some cases. Fair warning, this is basically just an excuse to share more photos of Lee Pace looking sexy, but it’s OK, we’ve all earned it.

Others understandable reacted in a similarly likeminded fashion:

One user went so far as to suggest the wardrobe person should be awarded the presidential medal of freedom, and you will hear no arguments from us.

We will say that Lee Pace’s husband is a very, very lucky man and leave it at that.