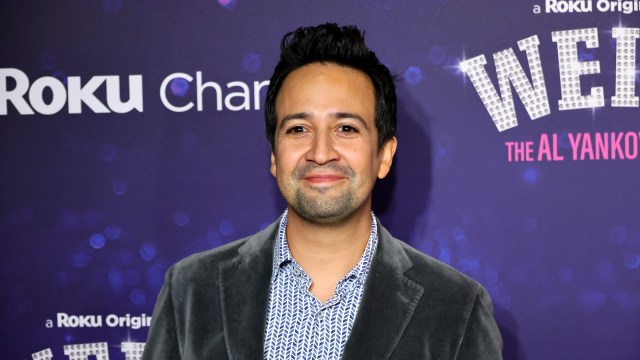 It looks like Tenoch Huerta won’t be the only Latinx actor with wings on his feet for long. As per the official Twitter account for the upcoming Percy Jackson and the Olympians TV series, Lin-Manuel Miranda will be joining the show’s cast as the god of messengers himself, Hermes.

@PercySeries tweeted out a pair of photos of Miranda standing next to his set chair which was emblazoned with the Disney Plus series logo and his character’s name in blue and silver. Miranda is a well-established Disney artist, having worked with the company several times since his star first ascended following his triumphant run of Hamilton. He’s composed scores for Moana and Encanto and even done a few turns in front of the camera, notably as Jack in 2018’s Mary Poppins Returns. Percy Jackson will mark his first live-action appearance in a Disney Plus series (Miranda voiced Gizmoduck in the DuckTales reboot).

Miranda was welcomed to the series by Percy Jackson’s creator, Rick Riordan, who used his own Twitter as well as his website to bid his fans to welcome the broadway superstar to the “Olympian pantheon.” Riordan had a message for superfans who may be confused by the fact that Hermes does not appear until the second book of the original Children’s Lit series. “You are correct. But remember when I told you we are adding new glimpses of backstory, Easter eggs, and other nuances to enhance the narrative while remaining true to the original storyline?” Riordan wrote, adding, “When you see the episode in question, it will make sense why we introduced Hermes early …”