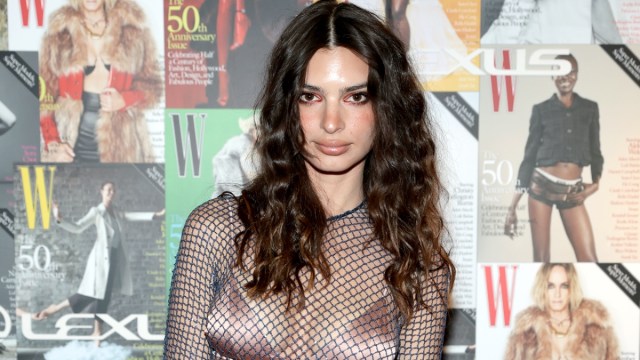 Ever since Pete Davidson and Kim Kardashian confirmed that they had gone their separate ways in August, the world has been waiting on bated breath to see which beautiful and famous woman the 28-year-old comedian would date next. Would it be the newly-single Gisele Bündchen? Martha Stewart??

While those are both good guesses, Davidson has allegedly moved on with Emily Ratajkowski.

This is according to the pseudonymous celebrity gossip Instagram account DeuxMoi, which posted a screenshot of a DM from a follower. “Can’t believe I’m saying this, anon pls,” read the all-caps message. “Em Rata and Pete Davidson on a date in Brooklyn together. Holding hands and ALLLLL.”

“His hands were allll over her and they’re clearly hooking up,” the source added in a second message.

Of course, you have to take this gossip with a grain of salt, as it comes from an anonymous source on the internet. But the account — which usually steers towards more mundane celebrity blind items — often does get things right. Just recently, the account linked Louis C.K. with alt-right podcast host Dasha Nekrasova, though it has yet to be confirmed or denied by either party.

And for what it’s worth, Ratajkowski is also newly single. The 31-year-old model split with her husband of four years, actor and producer Sebastian Bear-McClard, in July amid cheating rumors. “Yeah, he cheated,” a source told Page Six at the time. “He’s a serial cheater. It’s gross. He’s a dog.”

At any rate, it didn’t take long for the news to hit Twitter, where people reacted with a combination of shock, confusion, and amusement — as a few people even suggested that the apparent coupling is proof that we’re living in a simulation.

Plenty of women also came forward to remind men in perpetual disbelief of Davidson’s dating history exactly why women likely gravitate towards him. (In other words, he’s nice, funny, and is most likely a stand-up guy).

“Why is everybody surprised whenever a smart and attractive woman chooses to date a cute and funny guy who’s hung like a baby’s arm (according to the internet) like Pete Davidson?” tweeted political commentator Tara Dublin. “I don’t care how hot a man is, he’d be completely unattractive if he couldn’t make me laugh.”

Well if it is true, it seems like only a matter of time before we know for sure. Hide your tattoo artists!