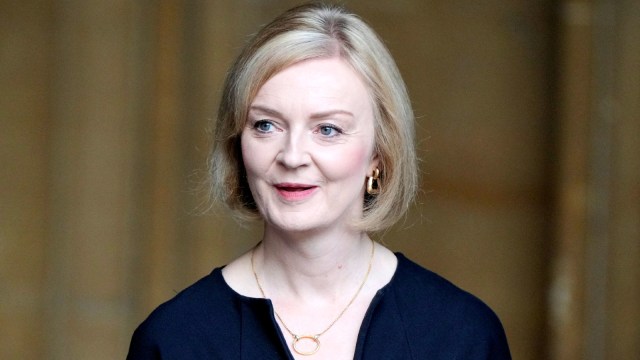 Conservative member of Parliament Liz Truss officially replaced Boris Johnson as Prime Minister of the United Kingdom last week, although the news was somewhat overshadowed by the passing of Queen Elizabeth II. Now that the dust is starting to settle, however, online conspiracy theories are starting to gain traction that Truss is a not-so-secret member of the BSDM community.

So some submissives may opt to wear what’s known as a day collar, which is a subtle style of chain necklace with an O-ring in the middle, similar to the ring on a leather collar.

And folks, this lady wears this very specific style of necklace all the time. She even has multiple necklaces in the same style, as eager conspiracy theorists on Twitter have been pointing out since last week.

“Liz Truss collar theorists are sleeping on the fact that it’s not just one, ol’ girl owns at least two distinct O-ring necklaces,” tweeted philosophy student Christa Peterson on Sunday, along with two separate photos of Truss wearing the style of necklace.

And they weren’t the only ones to notice that she seems to wear one every day!

Others similarly went down the rabbit hole of Truss’s neck wear. Twitter user @AliceAvizandum pointed out last week that it was “inevitable” it would eventually be revealed that Truss was wearing a day collar, and noted that she was wearing one that wasn’t exactly subtle of her first day as prime minister.

Twitter user @LillianaFuture likewise went full Charlie Day Pepe Silvia meme and came to the conclusion that she’s a true believer. “OK folks buckle the f*ck up,” she tweeted at the start of a lengthy Twitter thread on the subject — even suggesting that in the rare instances Truss doesn’t wear the O-ring, her other necklaces also have some BSDM connotation.

The same user also shared a TikTok breaking down the theory, coming to the conclusion that while the necklaces may not provide irrefutable proof that Truss is a sub, it’s still fun to go around claiming that she is.

If we were going to assume a British Prime Minister was a freak in the bedroom, we probably would have guessed it to be Boris Johnson. But hey, go ahead lady, and let your freak flag fly — no kink-shaming here!