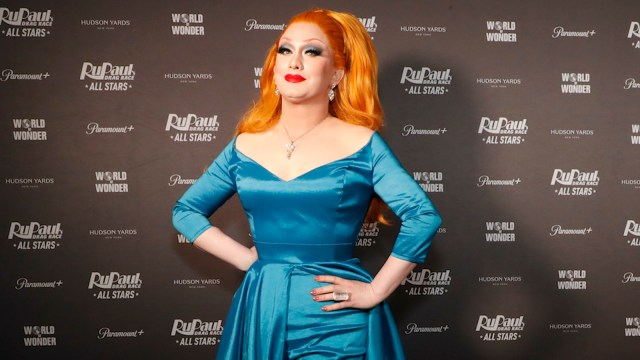 RuPaul’s Drag Race is filled with drag royalty, but perhaps none more so than two-time winner Jinkx Monsoon.

Jinkx, whose birth name is Jerick Roman Lamar Hoffer and who goes by the pronouns she/her in drag and they/them out of drag, first regaled fans with her quirky comedy and surprising singing voice back in 2013 on season five of RuPaul’s Drag Race. She fought head-to-head with Roxxxy Andrews and Alaska for the crown and the $100,000 cash prize and ultimately won. She became the first comedy queen to win the crown and paved the way for future comedy queens like Bianca Del Rio and Bob the Drag Queen to take the main stage.

In the years following her win, Jinkx has enjoyed a wide range of successes, including comedy and singing tours all around the world and numerous scripted shows with fellow drag queen BenDeLaCreme. Despite all that, she decided to return to her stomping grounds and compete in the all-winners season of RuPaul’s Drag Race All Stars 7 in 2022 where she went up against previous winners like Raja, Trinity the Tuck, and Monét X Change, among several others. Once again, she won the top prize and in the process made Drag Race herstory with some of the best comedy bits and Snatch Game impersonations to date, including the one and only Judy Garland, who, as we learned, loved a good Dean Martin and Frank Sinatra sandwich.

Jinkx is the only queen in Drag Race history to ever win twice. Now, in January 2023, she will make history once again with her Broadway debut in the Tony Award-winning musical Chicago as Matron “Mama” Morton, the only drag queen to ever portray the character. This is a huge accomplishment for Jinkx and further cements her as one of the most successful queens in RuPaul’s Drag Race history.

Who is Jinkx Monsoon’s drag mother?

Jinkx doesn’t advertise her drag mother often, so some aren’t familiar with her family ties. That being said, she is the daughter of Peaches Christ, a San Franciscan drag queen who is as wacky and talented as Jinx. Unlike her drag daughter, Peaches Christ has not been on RuPaul’s Drag Race. However, according to her, she is responsible for Jinkx’s Natasha Lyonne Snatch Game impression in All Stars 7.

Drag mothers, for those who are unaware, are established drag queens who take new drag queens under their wings to guide them, teach them, and be there for them through the ups and downs of drag life. Being a drag mother is one of the highest honors a drag queen can hold (aside from being a winner of RuPaul’s Drag Race, of course). Drag mothers are a special breed of drag queens. Like real mothers, they’re not all saints, but those who take their job seriously can make a lifelong impact on those they raise.

Who is Jinkx Monsoon’s husband?

Jinkx officially tied the knot in Jan. 6, 2021 with husband, Michael Abbott in a private ceremony in their living room. Aside from sharing a striking resemblance to Kurt Hummel (Chris Colfer) from the hit show Glee, Michael also shares a love for music. Michael and Jinkx regularly sing on stage together.

The couple met at a club in Manchester, England in 2019 while Jinkx was on tour, according to The New York Times. Michael was a bartender and had never heard of Jinkx or seen her on Drag Race, but their connection was immediate and a romance blossomed almost instantly.

The COVID-19 pandemic put a damper on their relationship following the travel ban that prohibited Michael or Jinkx from traveling outside of the country. “We skyped, we FaceTimed, we texted incessantly,” said Michael who was finally able to get clearance for a 90-day trip back to the US, at which point the pair had already discussed marriage.

The two tied the knot on Jan. 6, just mere weeks before Miachel was scheduled to fly back home. The pair have been happily married ever since.

A new season of RuPaul’s Drag Race All Stars will premiere in 2023, although the official release date and the cast have yet to be announced. Here are the queens we think deserve a chance to compete for the crown.