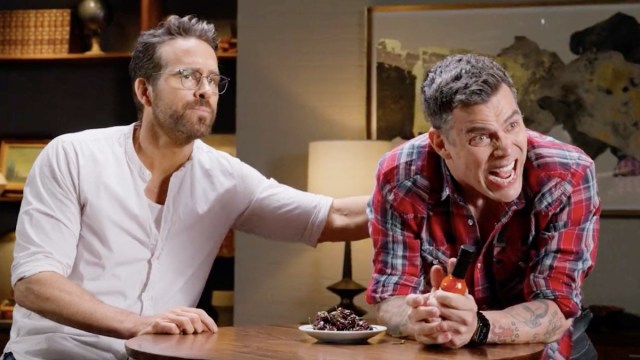 Ryan Reynolds is back with another spot for his latest business venture, the marketing software company MNTN, which provides a platform for users to upload, track, and optimize their ad content. This time, he brought none other than Steve-O on board to help him run a demo of the software.

But naturally, being the prankster-flirting-with-sadist that he is, Reynolds insisted that the Jackass star consume an entire Carolina Reaper pepper for the task, which weighs in at a decidedly not-for-the-faint-of-heart 1.5 units on the Scoville heat index scale.

“Hi I’m Ryan Reynolds, and welcome to my MNTN television software demo stunt,” the 45-year-old actor turned entrepreneur says at the beginning of the spot. “Today, we’ll learn why MNTN is the hardest working software in television by demonstrating how brands big and small are using it to transform their marketing.”

“Of course, that sounds like it could be pretty boring,” Reynolds continued. “So I thought, what if someone ate a Carolina Reaper right before doing the demo?” At that point, when Steve-O interjects that he thought he was there to promote his small business using the software, Reynolds assured him: “Oh, you are. You are. But we also would like to see you eat the peppers.”

“We had a full medical team on standby in case Steve-O accidentally got a piece of pepper on me during this MNTN demo,” Reynolds quipped, tweeting video of the stunt on Monday. “Safety first.”

To his credit, Steve-O did eat the pepper and managed to sweat, cough, drool, and sputter his way through the demonstration — albeit just barely, to the actor’s apparent glee — until Reynolds had to pick up the slack near the end.

“Honestly, MNTN makes literally everything about running an ad on TV simpler and more effective,” he said during the end of the demo. “But it does absolutely nothing for the burning hot f***ing sun in his mouth.”

“It’s my throat,” Steve-O just manages to squeak out and interject.

“I genuinely love marketing and I have been gobsmacked by how much fun it has been and how fast we have grown,” Reynolds said in a press release last June, shortly after the acquisition. “We wanted a future for our marketing arm that ensured we could continue to move fast, have fun, and do really rewarding work. I was blown away by the simplicity and speed of MNTN’s technology and how it opens up access to TV for advertisers who can’t afford upfront agreements.”