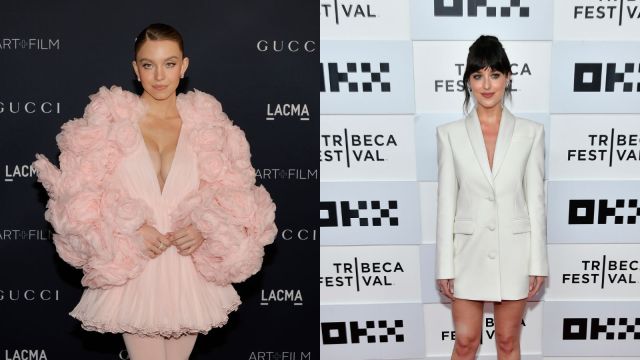 Sydney Sweeney was full of praise for her “hot” Madame Web co-star Dakota Johnson, revealing her nerves to work alongside her after seeing her in Fifty Shades of Grey.

Sweeney was walking the red carpet at the Los Angeles County Museum of Art (LACMA) 2022 Gala and was probed on her upcoming blockbuster Madame Web. Starring alongside fellow star Johnson, as well as Emma Roberts and Isabela Merced, the Euphoria star admitted to being heavily starstruck by Johnson.

I was a little nervous, I have to say — I snuck Fifty Shades of Grey in high school. My parents didn’t let me watch it and I watched it. So I’m a huge fan of her. She’s so hot […] Dakota, you’re hot and I loved working with you

The relationship of the Fifty Shades trilogy’s actors to the films is still a bit of a sore point, with all the stars of the film attempting to distance themselves as much as they can from it – although Johnson still feels her character is a positive, empowered woman. Sweeney will combine with Johnson for Madame Web, with Johnson playing the titular character, while Sweeney’s has been kept tightly under wraps but widely expected to be Julia Carpenter.

Johnson and Sweeney have been spotted several times on the set of Madame Web, with the potential for three or four superpowered individuals to show up in the film as various Spider-Women.