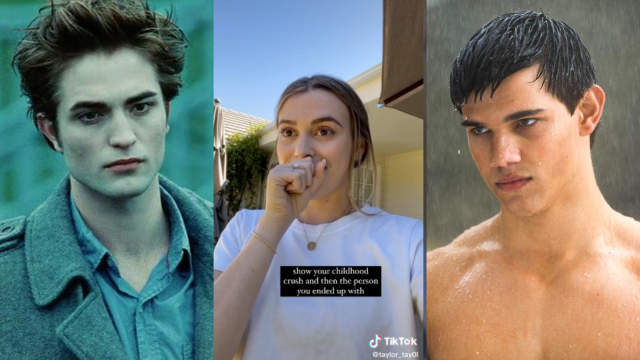 Although she’s now the general manager of Team Jacob, Taylor Dome, fiancée of Taylor Lautner, was once a committed member of Team Edward.

Dome divulged this hilarious irony in a TikTok video created from the prompt, “show your childhood crush and the person you ended up with.”

The video begins with her guilty face captioned by the above prompt, and then it cuts to photos of Robert Pattinson as Edward Cullen from the Twilight film series. The video ends with photos of Taylor Lautner, who played Jacob Black in the Twilight films and is currently Dome’s betrothed.

Although she revealed her surprising childhood crush in spectacular fashion, this wasn’t the first mention of her team-switching. During Lautner’s appearance on The Kelly Clarkson Show, he admitted, “She was Team Edward. She’s made up for it. I’m allowing her to make that mistake—it’s in her past. So she’s good now, but she was not Team Jacob unfortunately. Still love her.”

To prove allegiance to her new team, Dome sat next to Pattinson on a transatlantic flight and didn’t say hi! In actuality, she felt it would have been weird to introduce herself as Lautner’s then-unknown girlfriend.

The two Taylors made their relationship public in 2018, and on Nov. 13, 2021, Lautner announced their engagement.

While we don’t know when the wedding will occur or whether it’ll “have ten people or two hundred,” the Twilight star said that “there definitely will be a good amount of dancing and partying.”

We’ll remain on the lookout for a date.