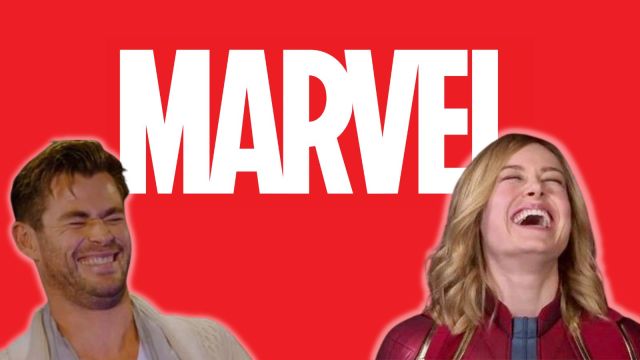 Working can often mean spending large portions of your life around people you mostly don’t like, but that’s not always the case. Thanks to the magic of press tours, we’ve been able to experience times the cast of the Marvel Cinematic Universe proving they were meant to be.

Here are some of our favorite moments from the cast of the MCU.

The early days of D23 Expo was also around the time marketing began for what seemed like an impossible crossover event in the form of Avengers: Infinity War. Benedict Cumberbatch was going to make his third appearance in the Marvel Cinematic Universe, and Tom Holland as well. Paired up beautifully together so Cumberbatch could shush Holland and prevent any spoilers, it has become a staple of press tours with the duo.

Samuel L. Jackson is one of the most ridiculously cool actors out there, and Brie Larson one of the finest actresses of her generation. Pair them up as was the case in 2019’s Captain Marvel, and you have a truly special friendship. The duo have worked together on multiple projects, including Larson’s directorial debut Unicorn Store. They’ve presented awards together, but their Carpool Karaoke together is the best thing you’ll see today.

An unlikely combo, but one of the favorites for many fans. Anthony Mackie is well known within the cast for stirring the pot on press tours, and utterly roasting his colleagues, but there’s few he enjoys doing it more to than Tom Holland. The poor Spider-Man star can barely go a press tour without Mackie somehow popping up with a one-liner sledging him.

Cumberbatch is two-time Academy Award nominated actor for a very good reason: he’s an absolute master of acting and impressions. Perhaps one of his best performances wasn’t in The Imitation Game or Power of the Dog, but actually during a BBC Radio One interview in which he did a pinpoint impression of young Tom Holland. When they need someone to play Holland in a biopic, phone up Cumberbatch ASAP.

Iman Vellani is a beam of light for the Marvel Cinematic Universe. A dedicated Marvel stan in her own time, it’s all the adorable interactions she has with her idol Brie Larson that makes her so gosh-darn relatable. When the duo met up for the first time, Vellani had a strange but equally adorable rendezvous. We can’t wait to see them together in The Marvels.

A hilarious promotional moment came between Chris Hemsworth and Scarlett Johansson as they traded cute playground insults. All was going very swimmingly until Hemsworth went for a truly awful insult about how Johansson is lucky she’s attractive, cause “she’s got nothing up here”. Yowch.

3. Jake Gyllenhaal having absolutely no clue about Marvel

Jake Gyllenhaal is part of a long line of immensely talented, award-studded actors making one appearance in the MCU, never to show up again. While some actors have been able to hide this a tad better like Mads Mikkelsen in Doctor Strange, or Christian Bale in Thor: Love and Thunder, Gyllenhaal was absolutely stumped. Asked about his favorite MCU flick, he was lost for words before stuttering to agreeance with Spider-Man: Far From Home co-star Tom Holland.

Oh Brie, you’re a magnet for these entries. During an ACE Comic-Con panel alongside fellow MCU star Tessa Thompson there was a discussion over lesbian representation in cinema, and it lead to both an incredibly funny and highly sexually charged moment.

Is there anything more wholesome than the entire Avengers cast joining forces to feud pettily at Family Feud? As the world anticipated Age of Ultron, the Avengers went on Jimmy Kimmel to play a Marvel-themed version of the famous game show with hilarious consequences. It’s a shame we’ll never get to see the originals back together again in a movie.