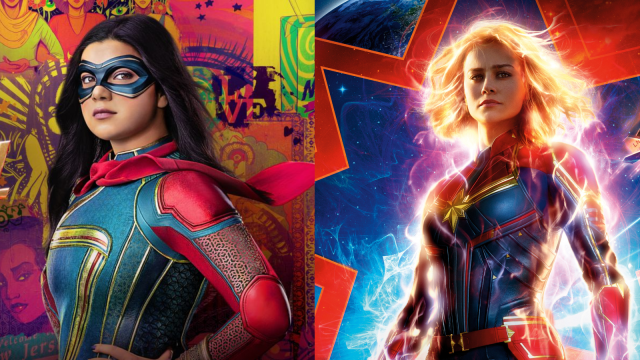 Iman Vellani has shared the bizarre circumstances around her first time meeting Captain Marvel star Brie Larson, during a recent Ask Me Anything.

Fresh off the back of her breakout performance as Kamala Khan in Ms. Marvel, Vellani went to Reddit to answer fan questions about the series, her future, and various nerdy fan questions. One of the obvious topics for the Pakistani-Canadian actress was her involvement with Larson in future projects and answered a question around their first time meeting.

Unsurprisingly, green screen and the magic of modern filmmaking came into play, as Vellani explained. The two were working together for the recently opened Quantum Encounter ride at Disney World.

“I honestly was very confused about what we were filming, I was in front of a green screen hopping from green box to green box, on my first day in London to film the marvels, met Brie IRL for the first time and suddenly we were doing this thing together. it was fun! But its weird acting with Anthony Mackie’s voice and while staring at a piece of orange tape on a c- stand pretending thats [sic] him.”

Ms. Marvel just wrapped its first season which will lead directly into the upcoming The Marvels, which will see the duo combine on the big screen for the first time. Captain Marvel was one of the highest-grossing films of 2019 and became the first woman-led superhero film to reach $1 billion at the box office.

Vellani has seem plenty of praise for her performance in Ms. Marvel, and a lot of attention has been given to the actress’s incredible knowledge of the Marvel universe.

Ms. Marvel is currently available to stream on Disney Plus, while The Marvels is due July 2023.