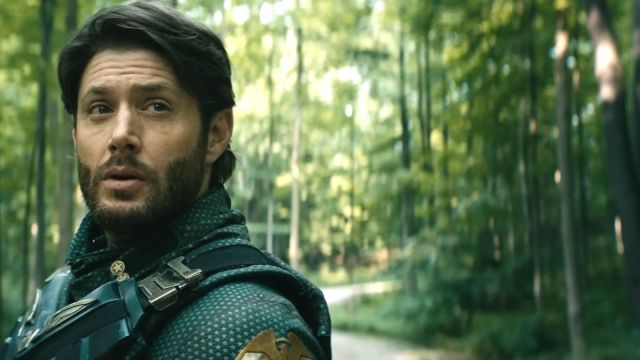 Leave it to Jensen Ackles to completely shake up the internet time and time again. The Supernatural actor switched the blades and shotguns for spandex on The Boys, and he’s proving that age is just a number when it comes to showing off his guns- and no, we’re not talking about the firearm.

Earlier today, The Boys‘ official Twitter account shared a striking image of the newest soldier in the superhero universe. With an equally impressive pun compared to the picture, the image of the actor in a gym was shared with the caption “More like Shoulder Boy, innit.” Is this a new supe? Because everyone seems very okay with it.

The image, in which Ackles appears to be in a gym, shows the actor preparing for his role as Soldier Boy, a major antagonist on the show and America’s first and greatest superhero before Homelander and Payback. The character portrayed by the actor is a direct parody of Marvel’s Captain America, as Soldier Boy is also a super-soldier who allegedly helped good triumph over evil during World War II.

The show is currently filming and in preparation for the fourth season, with pictures from behind-the-scenes being shared daily. The constant stream of content on the set has been causing havoc among fans, who have been speculating about all the new superheroes that may be on the rise in the superpowered debauchery.

The Boys is currently available to stream on Amazon Prime Video. Filming for the fourth season began in late August earlier this year, without a release date just yet.