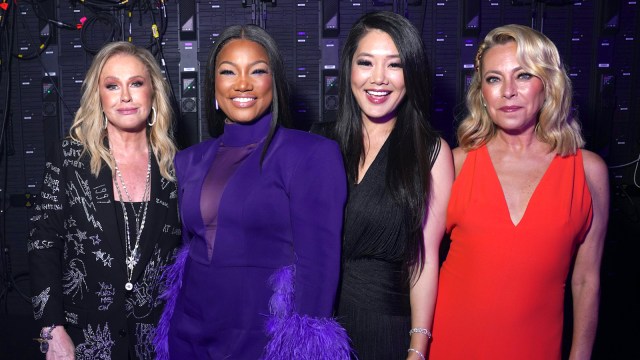 Take it from the ladies of The Real Housewives of Beverly Hills – they know good drama when they see it, and according to them, Don’t Worry Darling is good drama.

In a paid partnership Instagram video no one asked for or saw coming, Dorit Kemsley, Sutton Stracke, and Crystal Minkoff share their glowing review of Olivia Wilde’s upcoming psychological thriller, confirming that the movie does indeed hold up to the housewives’ very high standards.

The promotional video opens up on the riveted faces of the three ladies watching a sneak preview of the movie in a dark theater over a shared bucket of popcorn. In the background, Florence Pugh’s character Alice can be heard saying “Everyone is acting like I’m crazy, but I’m not crazy.” In unison, the ladies gasp.

“You guys, can we please talk about this film,” says Kemsley, flanked by Minkoff and Stracke at a cocktail table, three colorful drinks stationed in front of them. “So good,” says Minkoff. “I loved it,” agrees Stracke. “It was a rollercoaster and you never knew what was going to happen,” adds Minkoff.

“I thought Florence Pugh’s character was this really capable, strong woman,” says Kemsley, evoking thoughts of Pugh’s determination not to speak about Wilde in any way shape or form since getting called Miss Flo. “You could tell that Harry Styles was fully invested in this character,” continued Kemsley, leading one to recall the whirlwind that was “spit-gate“, which has since been refuted.

“I love the town of Victory,” says Minkoff, referring to the fictional town in which the characters of Don’t Worry Darling reside. “It’s like pristine and perfect.”

It’s yet to be seen whether the drama in Don’t Worry Darling will actually compete against the real-life drama played on the small screen between these diamond-clad housewives. The movie’s 36 percent score on Rotten Tomatoes foreshadows a potential face-plant, but that hasn’t slowed the ticket sales.

You can catch all new episodes of The Real Housewives of Victory – ahem, we mean Beverly Hills, when they premiere every Wednesday on Bravo at 8 p.m. ET. Don’t Worry Darling will make its theatrical debut on September 23, 2022.