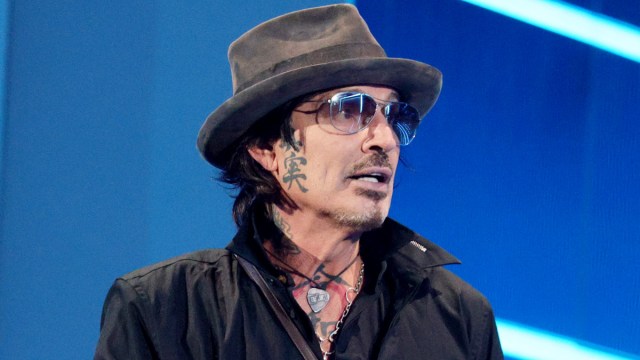 Earlier this month, Mötley Crüe drummer Tommy Lee shocked his unsuspecting fans on Instagram by posting a grid photo of his fully naked lap, with his famous penis on full display. Despite the platforms strict nudity guidelines, the photo inexplicably stayed up for at least five hours before finally being taken down.

But at least now we know why he did it. During a concert in San Antonio, Texas over the weekend, the 59-year-old gave a perfectly reasonable explanation for the uncensored photo — that he was on a “motherf*cking bender.” Rock and roll, y’all!

“A couple of weeks ago, we had a two-week break off the tour, and I went on a motherf*cking bender bro — a bender,” Lee told the crowd in a video he likewise tweeted on Sunday. “I got f*cking sideways as f*ck and got naked and posted pictures of my dick.”

“And usually, I mean I’m a titty man, so I like to see titties, but tonight — tonight it’s equal-opportunity night,” Lee questionably added. Tonight I want to see everyone’s dick. C’mon, boys, pull your shit out. Pull your fucking junk out. Let’s go.”

He then attempted to goad a man in the crowd wearing a pink polo shirt to pull his penis out. “Show the world that mothers*cking hot dog,” Lee told him from the stage, but the man shook his head and pointed to the woman he was with. “The wife says no? Divorce!” Lee told him.

Well, you know, always better to listen to the wife than face what would undoubtedly be indecent exposure charges. Because contrary to Lee’s apparent beliefs, the world largely doesn’t want to see his or anyone else’s “hot dog” without consent.

“I DID NOT NEED TO SEE TOMMY LEE’S DICK ON MY INSTAGRAM FEED TOMMY WHAT THE F**K,” one user all-caps exclaimed, shortly after the photo initially went viral. “Tommy Lee truly just posted his whole penis to instagram huh,” tweeted another confused fan.

“Why is Tommy Lee’s dick on his instagram and WHY ARE THE GUIDELINES IGNORING IT,” added another user, along with a censored version of the photo.

You can see the NSFW version here — though, you’ve been warned.