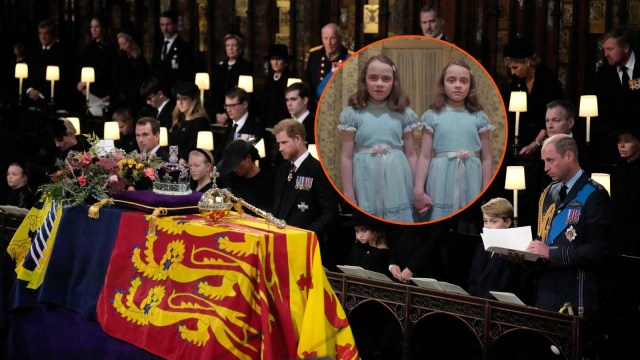 No, really: the twins from The Shining waited in line to pay respects to the late Queen Elizabeth II during her funeral.

We’re not talking about some kind of disrespectful fan edit of Stanley Kubrick’s 1980 horror film that centers on a creepy hotel overflowing with ghosts; the actual actors who portrayed the identical twin ghosts made a post on Twitter that they were in line to pay respects to the Queen.

“In the Queue!🤞🏻To view the Queen Lying in State,” was the caption from the official Twitter account for Lisa and Louise Burns, alongside a photo of a wristband to prove the validity of the historic moment of national mourning in the U.K.

The pair made a couple of other posts from England while they were waiting, sharing photos of themselves in front of Tower Bridge and Big Ben.

The longest-serving monarch in British history passed away over a week ago at the age of 96, with a funeral finally taking place Monday morning after Queen Elizabeth II laid in state for days at Westminster Hall. Celebrities such as David Beckham and Elizabeth’s royal relatives — such as Prince Harry and Meghan Markle — all paid tribute to the late ruler on social media and in person.

The funeral started out at Westminster Abbey before migrating over to Windsor Castle for a final ceremony amongst family, as We Got This Covered reported in a live blog post. Even the transportation of Queen Elizabeth II’s coffin from one location to another drew large crowds of people observing the procession from the street.