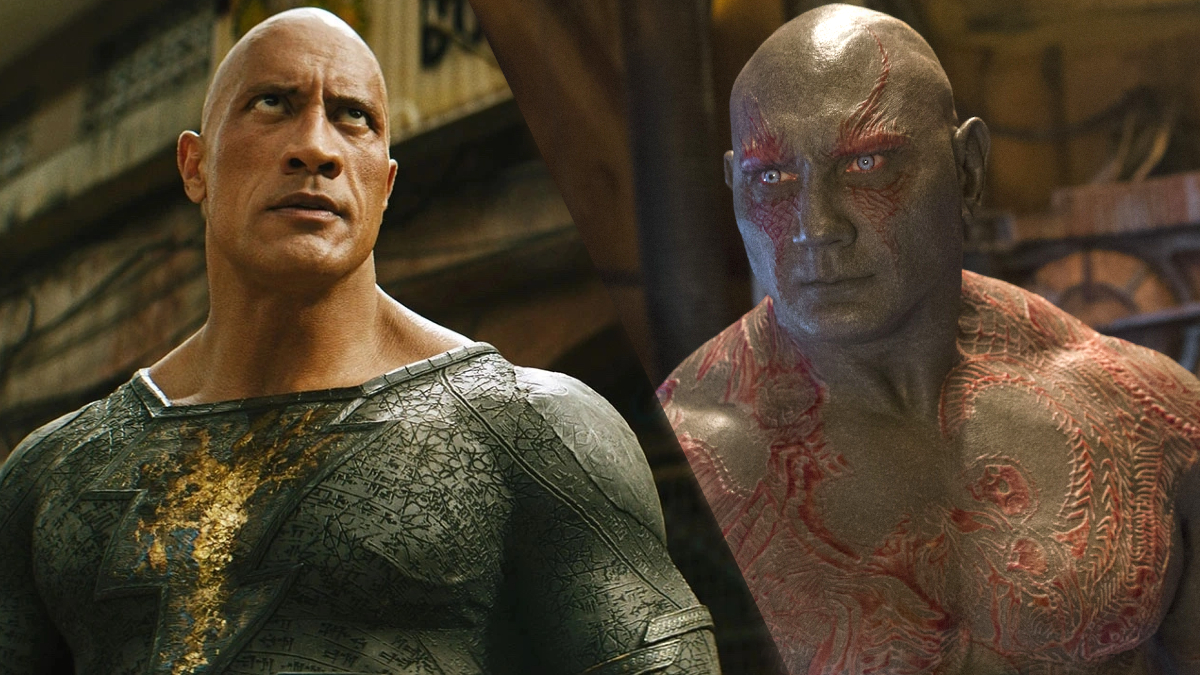 You might be able to teach the wrestler how to act but you just can’t take the wrestler out of the actor. Fellow grapplers-turned-thespians Dave Bautista and Dwayne “The Rock” Johnson have been engaged in a smackdown-style beef since the Glass Onion actor called out The Rock’s acting talents in a recent interview.

“I never wanted to be the next Rock. I just want to be a good fucking actor. A respected actor,” Bautista fired off in his latest GQ interview. And while that’s more than enough to get Johnson’s famous eyebrow twitching there’s no need for him to take this lying down — even if his power of flight has recently been canceled. Here are five things Dwayne Johnson can do to shut down Dave Bautista’s opinion once and for all.

When they go low you go high. High art that is! Mel Gibson, Ethan Hawke, and even Keanu Reeves have all used the Bard of Avon’s works to elevate their reputations and show off their acting chops. Why not MacRock? A Midsummer Night’s Rock? Much Ado About The Rock? The possibilities are only limited by the 38 plays Shakespeare wrote during his lifetime, all of which are just waiting for the man to put his stamp on them. Let’s see you be or not to be, Bautista!

Sure, The Rock and Bautista have faced off with each other in the ring, but not on the stage. What better way to prove your brand is better than another’s than by appearing in the same vehicle, one-upping your fellow actor all the way? Of course, the Rock could try to rope Bautista into an original story, but why not make it harder to resist by remaking a classic buddy movie? Bautista Cassidy and the Sundance Rock, anyone? How about an updated Blues Brothers? Or just go completely classic with an Odd Couple remake — who would make a better Felix Unger than The Great One himself?

Guardians of the Galaxy may have put Bautista on the movie star map, but his brief but intense performance in Blade Runner 2049 really started the buzz regarding his acting chops. Why not take that glory away from him? Start hitting up Ridley Scott for a role in the currently under-development Blade Runner 2099 TV series. Or get Denis Villeneuve in a full nelson until he agrees to a film sequel. If nothing else, start lobbying for an outright remake of the original classic — as the antagonist! A new Blade Runner with Johnson playing Roy Batty is guaranteed to be Roy Battier!

We all know The Rock knows what’s cooking. It’s fifteen pizzas, three racks of cinnamon buns, and a whole birthday cake for one of his legendary cheat meals. But hey — as long as you’re already putting your body through the same kind of macros that would fuel an entire platoon full of elephants — why not go that method actor route? Fans go wild when actors like Robert De Niro and Christian Bale push their bodies to the limits to transform physically for their roles. For The Rock, he could probably just skip a few cheat days to lose a dramatic amount of bulk. Or he could go the opposite route. Stay away from the gym for a few weeks and he’s practically halfway to playing Jake LaMotta in the last half hour of Raging Bull.

Sometimes you’ve just got to go with what you know. And if that means you need to revert back to being a heel again, so be it. Besides, everyone loves a villain, right? Just make sure you find a good heavy one. And to Bautista – just say, “know your role and shut your mouth.”