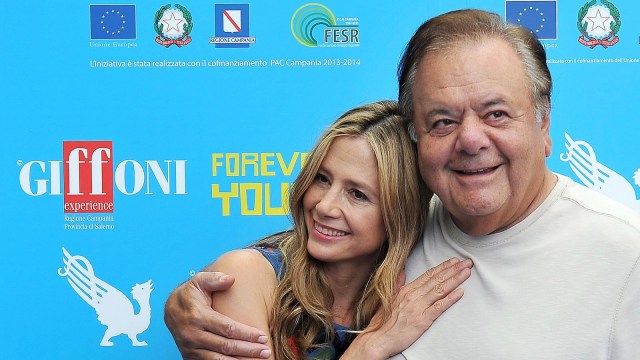 The late character actor Paul Sorvino left behind a body of work that contained 172 acting credits in a career that spanned multiple decades. He also found himself the head of an acting dynasty when his daughter Mira Sorvino followed his footsteps into an acting career in the early 1990s. Mira herself has achieved an impressive 106 credits to her name including her role as Linda in 1995’s Mighty Aphrodite for which she took home the Academy Award for Best Supporting Actress.

In her moving 1996 acceptance speech, Mira stated that everything she knew about acting she had learned from her father (a sentiment which reduced her father to tears). Here are the movies that Paul and Mira appeared in together over the years prior to his passing.

Paul had a starring role in this 1985 campy sci-fi/horror send-up of consumer culture that went on to become a cult classic. But while Paul had the substantial role of paranoiac militia leader Colonel Malcolm Grommett Spears, Mira only had a blink-and-you’ll-miss-it walk-on part as a factory worker extra. The pair’s first onscreen collaboration happened because seventeen-year-old Mira had visited her dad on set that day and ended up being put to work by the director, Larry Cohen.

The Sorvinos’ next work together was a family affair. The Trouble With Cali was written by Paul’s daughter and Mira’s sister, Amanda Sorvino. The tense family drama stars Paul as the father of a dysfunctional family and features Mira as his daughter’s ballet teacher. The film also featured Mira and Amanda’s brother, Michael. Unfortunately, the film was never released theatrically due to its failure to negotiate a distribution deal.

Mira and Paul were both featured in the star-studded cast of The Red Maple Leaf, a Canadian/American political crime thriller. Mira played the wife and Paul the father of the film’s protagonist, played by Canadian entrepreneur Frank D’Angelo, who also wrote, directed, and produced the film. The cast included the late James Caan, Martin Landau, and Robert Loggia, among others.

This 2019 crime thriller released on Netflix pairs Paul and Mira as a police captain and detective, respectively, who help Detective Brian Larson, played by Kristoffer Polaha, track down the serial killer who abused him as a child.

Mira and Paul’s final project together was this comedy-drama based on bartender Mark Berzins’ self-help book, Most Guys Are Losers (And How to Find a Winner). Mira stars as mom, Amy, who along with her husband Mark, seek to raise their daughter to have a happy love life, despite the fact that she’s already fallen in love with someone.