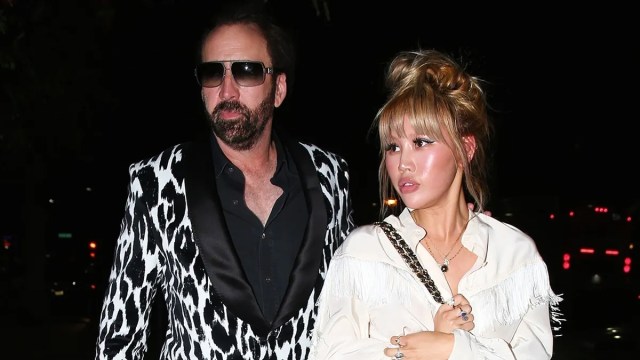 Everyone loves an intriguing tale of a memorable Vegas wedding, and it is imperative that the words/phrases like ‘drunk’, ‘a makeshift wedding venue’, ‘lack of memory of the event’, and most importantly ‘repentance’ are meticulously incorporated into the story to enhance its appeal.

Our pop culture has done a tremendous job in placing some of the iconic romance stories within the fabric of an infamous Vegas wedding, be it Ross and Rachel’s unforgettable wedding incident in the hit sitcom Friends, or Jack and Joy tying the knot in What Happens in Vegas.

However, some of the more prominent celebrities have also retained the task of marking ‘Sin City’ on the map for being the ultimate destination for impromptu matchmaking, and the most noteworthy of them is none other than the enormously talented Nicolas Cage.

The Wild at Heart star reportedly entered into a much talked about marriage on March 23, 2019, with his girlfriend Erika Koike. However, the marriage lasted only four days, after which he filed for an annulment. Their marriage came to an abrupt end almost two months later when they were granted a divorce on May 31.

Who is Erika Koike?

Erika Koike has earned a substantial amount of public recognition for being Hollywood superstar Nicolas Cage’s fourth wife and for being involved in a fleeting marital relationship on top of that.

She was born in 1985 which makes her 37 years old in 2022. She is credited for appearing in a 2012 short movie called Hankikanto.  Apart from her very short acting career, she was a make-up artist before meeting Cage in 2018.

The wedding and annulment

Cage and Koike reportedly started dating in April 2018 when they were spotted vacationing in Puerto Rico. The pair managed to keep their relationship private until their short yet memorable trip to Las Vegas.  In 2019, both Cage and Koike were spotted in Vegas and only this time excessive partying and drinking constituted a major portion of their fun eventually leading to the duo getting hitched.

However, their marriage did not last, and after four days, Cage submitted an application for annulment, adding them to the list of the shortest celebrity marriages following a less than two-day marriage between Britney Spears and Jason Alexander.

According to him, their marriage was not valid and there were several reasons for this claim. First, the Face/Off star stated that both of them had been “drinking to the point of intoxication” before they decided to marry, and as a result “lacked understanding” of the weight of the situation they were getting involved in.

Other reasons also included revelations about Koike’s supposed boyfriend who was a ‘drug dealer’ and Cage’s lack of awareness about her relationship with the other man. Other revelations include criminal charges especially domestic violence against her then-husband in 2006 and a neighbor leading to DUI charges against her. Reports stated that Koike hid her relationship and criminal history from Cage.

How did Koike respond?

Things appeared to be less in Cage’s favor when Koike criticized his claims and appealed for spousal support. She is believed to not agree with Cage’s reasons for annulling the marriage thus adding further complications.

For providing spousal support of any kind, both Cage and Koike needed to be considered spouses, which did not line up well with Cage’s appeals for annulment. This started the divorce proceedings that the couple was granted after two months.

The results of the end of the marriage that received a large amount of media and public attention were not publicly revealed. No official statements were made with regard to whether any form of spousal support was provided to Koike by Cage except that following the divorce, both went their separate ways.

Where are they now?

Nearly three years after their marriage, fans are still interested in knowing about the relationship status of the actors. Not much information has been gathered about Koike apart from the fact that her relationship with Cage has ended for good.

It became clear that Cage has moved on for good when he was seen publicly holding hands with Riko Shibata, who he later married in 2021, making Shibata his fifth wife. In 2022, it was reported that the pair were expecting a girl.

Congratulations! 🥂 So cool that Mom and Baby will be closer in age than Mom and Dad. #specialbond https://t.co/Tx4E7HNcBI

However, not everyone reacted positively to this news, especially Katherine Ryan, who made a scathing sarcastic remark about the stark age gap between the couple.