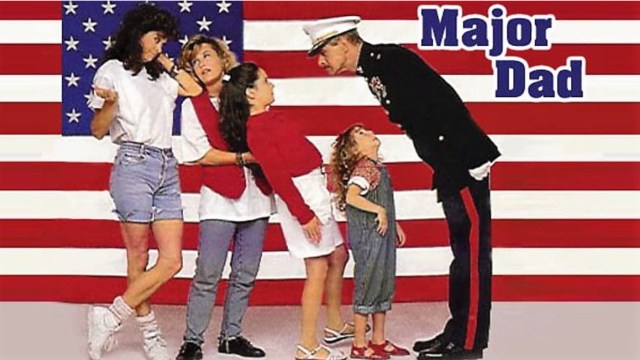 Nostalgia is a major player in entertainment at the moment, as shows like Stranger Things lean on specific time periods, appealing to our shared memories and sentiment.

As more shows remind viewers of their favorite eras in entertainment, a growing audience is looking back on treasured old series. Shows that ended decades ago are seeing a resurgence online, as people return to their small-screen favorites with new eyes. This is prompting questions about some of television’s most beloved former creations, as viewers look back and wonder about the casts that used to bring laughter, love, or drama into their homes. Shows like CBS’s Major Dad, a sitcom that aired in the early 90s, are at the forefront of this trip down memory lane.

Fans of the military-minded series are finding themselves curious about the cast, many of whom have largely disappeared from the public eye in recent years. It’s been nearly three decades since the last episode of Major Dad aired, but that doesn’t mean the show’s cast is irrelevant in 2022. In fact, several of them are still major players in the entertainment industry.

In the years since he last sauntered onto screen as Major Dad’s… well, Major Dad, Gerald McRaney has branched out into a number of projects. The 74-year-old actor has hardly slowed down in the years since Major Dad aired its final episode, appearing in a number of massive televised hits, from House of Cards to NCIS: Los Angeles and even This Is Us.

He hasn’t stopped at television, either. McRaney certainly prefers the small screen — where he’s starred in more than 100 different programs — but he’s also appeared in a handful of films. He appeared in 2002’s Hansel and Gretel alongside Howie Mandel and Sinbad, and in 2019 starred as Tom Campbell in A Violent Separation. Through it all, his wife Delta Burke has been by his side. While the actress is technically his third wife, Burke and McRaney have been married since 1989,  the same year Major Dad started airing. His time on the program made McRaney a huge supporter of the military and veterans, something that’s stuck with him throughout his life.

Another televised heavy-hitter, the woman who starred alongside McRaney in Major Dad has also seen plenty of work since the show ended in the early 90s. In the nearly three decades since, Shanna Reed — a former dancer — has gone on to star in a handful of other programs, including Magnum, P.I. and Beverly Hills, 90210. These days, she refers to herself as a “former actress,” after appearing in her last on-screen role in the late 90s.

Reed’s career isn’t nearly as stacked as McRaney’s, but the 66-year-old actress looks back on her time in the spotlight fondly. She and McRaney harbored starkly different political ideals during their time on Major Dad — with Reed largely leaning left, while McRaney leaned right — but she told the Washington Post in 1989 that they “actually had fun with it.”

“I strongly believe what I believe and obviously so does Mac,” she said. “That’s what makes the world go ’round.”

She got her start on shows like Major Dad, but these days Marisa Ryan has stretched far beyond her CBS roots. She’s best known by most viewers as Nina Grabowski from Sex and the City or Detective Nell Delaney from New York Undercover.

In the decades since Major Dad aired its final episode, Ryan has appeared in several dozen film and television roles. Her on-screen career began early, with her first-ever acting gig landing her in a Pamper’s commercial at only five months old, according to NY Daily News. The years since have seen her maintain a consistent presence in the spotlight, but rarely in a show or film’s most central role.

One of the most enduringly successful entries on this list, Nicole Duboc has led a busy life. She got her acting start young — even before she starred in Major Dad — working first on Our House and then on ALF before the military-minded series presented her with her big break. She appeared in each and every episode of Major Dad before pivoting to a range of new roles, largely in television.

Following her run of acting gigs, Duboc made the transition into behind-the-scenes work. She’s been a staple of the writing room for years now, with contributions to a number of stellar animated series, like Star Wars: Rebels, Kim Possible, and TMNT. She was even lead writer on a few projects, including an animated Transformers series, all while graduating pre-med from Yale with a degree in English. Her work has earned Duboc a handful of Emmy nominations, as well as the 2018 Animation Writers Caucus Animation Writing Award, which celebrated decades of contributions to the world of animation.

The youngest of the MacGillis children, Chelsea Hertford was only 8 years old when she got her start in Major Dad. Despite her young age, she held up well, delivering four seasons worth of charming, clever, and adorable lines alongside seasoned actors and established stars.

In the years since she appeared on Major Dad, Hertford has largely stepped back from stardom. She appeared in several other roles as a child actor, but in adulthood seems to have switched gears. Following her years on Major Dad, Poltergeist II: The Other Side, and Who’s the Boss, she was absent from Hollywood for years. She did crop back up for Jordan Michael Blake’s Clean Blood, but apart from the 2018 short film, she’s mostly kept to herself.

Unlike Gerald McRaney, who’s military energy was so convincing he went on to star in largely service-themed projects, Matt Mulhern’s career past Major Dad spanned multiple genres. His longstanding career has largely seen Mulhern appear on television, rather than on film, but his range of projects is far-reaching. He got his start on 1986’s Dallas: The Early Years, before branching out into projects like Major Dad and a slew of single-episode cameos on major series like Murder, She Wrote and Law & Order.

In the years since Major Dad completed its run, Mulhern has maintained a consistent, but not overly prominent, career in television. He’s seen a smattering of roles over the decades, with his genre options becoming more limited as Mulhern ages. These days, he’s following in McRaney’s footsteps, with many of his most recent roles centered around the police or military. During that time, he also started a family, wrote a novel, and — in 2015 — left the world of film and television for good. Instead, he went back to school, and in 2019 earned his master’s degree in history. At 61 years old, he is currently pursuing his PhD from New York City’s Fordham University.

One of Major Dad’s early favorites, Marlon Archey was unfortunately a short-lived feature of the series. Following the first season, he was written out of the series and pivoted to different projects. Like many of his Major Dad co-stars, he appeared in a smattering of popular television shows in the years following, with cameos in series like Beverly Hills, 90210 and The Fresh Prince of Bel-Air.

Eventually, Archey stepped back from acting entirely. In the late 90s, he switched gears from the spotlight and took on a trio of fresh challenges at California’s St. Genevieve Parish Schools. These days, he’s thriving as a teacher at the school, as well as its official Athletic Director and soccer coach. His performance in these roles is the subject of frequent media praise, according to Looper. He was even listed among Silver Waves Media’s “50 Impactful South California Athletic Directors,” with high praise attached to his name.

A staple of both the stage and the screen, Jon Cypher’s acting career spanned nearly 50 years in total. His first-ever appearance saw the 90-year-old actor star alongside Julie Andrews in 1957’s made-for-television film, Roger’s and Hammerstein’s Cinderella. The following years were jam-packed for the popular actor, who appeared in more than 50 television projects before Major Dad even came along. The years since have hardly seen him slow down, as Cypher moved onto projects like JAG, Walker, Texas Ranger, and even Batman: Beyond.

Cypher is an actor through-and-through. Unlike some of his Major Dad costars, he never left the world of acting. He’s appeared in more than 60 television series, 15 films, and nearly 20 theater productions. He hasn’t appeared in much in recent years, after his on-screen (and on-stage) career slowed down in the early 2000s, but the actor is enjoying his well-deserved retirement. He has plenty to look fondly back on, over almost 50 years of work, and even noted — in a 2014 interview, that “poverty” is the secret behind his longstanding success.

She didn’t last as long as some of the series regulars, but Whitney Kershaw’s Merilee Gunderson was a staple of Major Dad’s first season. It is broadly the role she is known best for, despite several other televised appearances over the years.

Kershaw pivoted from her season on Major Dad into a number of other television projects, but none brought her the name recognition of the popular CBS series. Following her stint on Major Dad, she went on to secure roles in television shows like The Wonder Years, Simon & Simon, L.A. Law, and Knots Landing. She is also known for debuting the role of Sillabub in Broadway’s Cats, and for singing the closing theme to Big Blue Marble, a children’s show her father produced. Kershaw is married to writer, director, and producer Glenn Kershaw, and the two share a famous daughter, singer/songwriter Lily Kershaw.

Beverly Archer’s career was defined by roles like the one she enjoys in Major Dad. The now 73-year-old actress made a number of appearances following her days on the program, but is best known for her Major Dad role and that of Iola Boylen in Mama’s Family. She also appeared in The Young and the Restless, as well as ALF and Married… With Children. Her acting career, past a few highlights, largely sees Archer appearing in single episodes of popular programs.

Archer expanded her career beyond acting in her later years, adding writer to her resume after she wrote several episodes of ALF and Mama’s Family. She officially retired from acting in the early 2000s, instead shifting her focus to a number of more personal pursuits. These days, she spends most of her time simply living her best life, sculpting, traveling, and spending time with her husband Robert Bernard, according to Looper.

Schnabel’s mark on Hollywood isn’t nearly as notable as some of the actors on this list, but he didn’t stop at Major Dad. While he did retire from acting by the time 1993 came to a close, Schnabel first spread his talent to another popular early 90s program. He appeared in a single episode of Murder, She Wrote in 1993, before he hung his acting cap up for good.