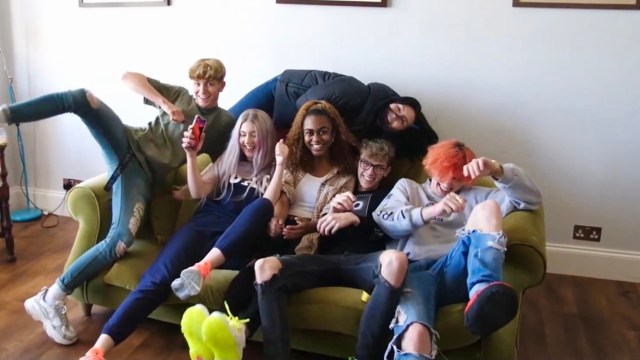 During the pandemic, fans of TikTok were treated to exciting content from their favorite creators with the help of The Hype House and Sway House. In the UK, six members were also tapped to explore the possibilities of influencers living under one roof, and Byte Squad was created in March 2020. The British TikTokers moved in together to create fun content on the platform, while promoting staying safe amidst the lockdown.

According to VICE, the young influencers were subject to a rigorous TikTok regimen which involved posting videos, and continuous filming in order to hit a weekly social media target. Though the house did not last as long as expected, the faces of the group have definitely kept up their momentum in fame, growing in popularity across the country and even internationally on the social media platform.

Here are the six TikTok stars that made up Byte Squad.

Born on July 16, 1999, the TikTok personality started as a skateboarder. He is known for his comedy skits, dance, and acting videos which have garnered over three million followers. In 2019 he started dating fellow Byte Squad member Monty Keates, but they broke up in 2021. Sebastian’s YouTube channel (Stressed with Sebb) has over 44 thousand subscribers and is still growing.

The Oxford-born social media influencer is mostly famous for her comedy videos. Born on March 16, 2001, KT was an aspiring model before gaining her TikTok fame. With about 2.6 million followers on her TikTok account, KT follows the regular influencer lifestyle and promotes brands that sponsor her via her platform. Her fame reached an all-time-high when she participated in the dating reality show Lovestruck High which saw her fanbase increase greatly. On her YouTube channel (KT Franklin), she is almost at the 300 thousand subscribers mark.

Katie explained the vigorous work ethic in a chat with VICE, revealing the milestones they’ve had to hit, as well as constantly putting out content.

“We sit down every Friday and we all talk about what we want to hit, but it’s definitely enforced by Lucy (the house manager), to make sure we get it. There are days when we’ll talk about how we want to get 300k or 200k next week, so we want to push more and make more content. But we all want that anyway – it’s just something we’ve all put our energy into getting, so when we do hit those milestones it’s great and a reward for all of us. Until I’m sleeping, I’m not going to stop filming content – I just enjoy it.”

Born on June 17, 2002, Monty is a TikTok personality known for his song covers, dance, lip-sync, and comedy videos. He joined TikTok in 2018 and has since gained over a million followers on the platform. He dated Sebastian Wood for two years before the two separated and the pair were nicknamed Mebby by excited fans. He is currently in a relationship with the singer and TikTok star, Lozeak. Monty is also a model and posts most of his modeling pictures and videos on his Instagram account, @montykeates.

Born on July 11, 2000, Shauni is famous for her transition and lip-sync videos. The TikTok star is the UK’s fourth most popular TikTok personality, with over 17 million followers on TikTok. With her enormous platform, she spreads body positivity and self-love. Shauni is in a relationship with fellow Byte Squad member Jake Sweet, and runs a YouTube channel (itzshauni) where she posts challenges and prank videos.

Speaking with Insider, Kibby revealed the driving force behind her body positive image is her audience of mainly young viewers, and that even though she gets some negative comments, she’s a pro at blocking them out.

Because I’ve got a young audience, I feel like it’s really good for me to do that. When I first started posting, I knew that if I was going to do it, I was going to get hate. I’m good at blocking it out. I don’t think it really bothers me at all.

The lip-sync and comedy creator Lily Rose was born on Sept. 19 in 1999, and her account has amassed over a million followers and counting. After her lip-sync videos went viral, Lily decided to use her platform to talk more about relatable, day-to-day stuff. She often posts prank videos and vlogs on her YouTube channel (itslilyrose). She left the Byte Squad House in 2021 after an altercation with some other members.

Born in Aug. 18 in 1997, Jake is famous for his comedy, challenges, and slow-motion videos. He began posting content on TikTok in 2018 and has gained over 10 million followers since then. Jake is known to be in a relationship with Shauni Kibby. He posts most of his challenge and prank videos on his YouTube channel, Jake Sweet.