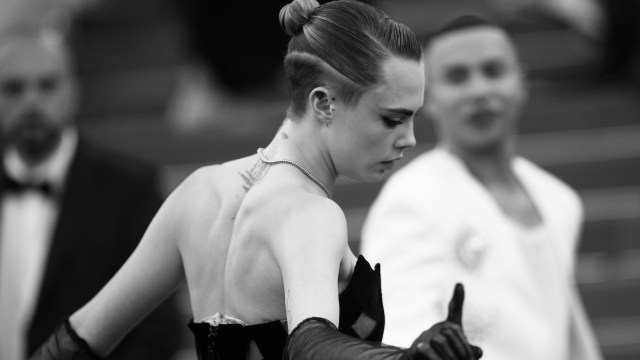 The internet has heard strange rumors about Cara Delevingne these past few days, and with the model canceling her appearance for New York Fashion Week, her fans are starting to feel genuinely concerned for the English celebrity.

It all started when Delevingne was seen earlier this month exhibiting erratic behavior on her way to Van Nuys Airport in Los Angeles. The model could be seen dangling her feet from the car window with no shoes on. She then proceeded to walk the length of the tarmac in her socks, smoking and looking ten different ways out of sorts.

Apparently, the model was two hours late for her flight on Jay-Z’s private jet, and when she did arrive, Delevingne was seen leaving the airport after only 45 minutes, looking even more bedraggled.

Folks on social media would’ve let the occasion be buried under a dozen new rumors and hearsay, not to mention official updates on the actress’ Instagram page, but Cara’s A-lister friend Margot Robbie leaving her apartments also looking visibly distressed made sure that the controversial saga would continue for at least a little while longer.

Now, Delevingne has failed to appear for NYFW, further buoying the rumor mill into motion, with the internet collectively wondering if the English model is doing okay.

Of course, if you were to ask the tabloids, they’d give you several different takes on Delevingne’s more-than-curious exploits over the past week or so, all but confirmed in their own eyes. But until the model decides to address the situation, or have a spokesperson do so, all we have to go on are scuttlebutt and speculation.

One thing’s for certain, though; the internet is definitely worried about one of their favorite fashion models and women’s rights activists.