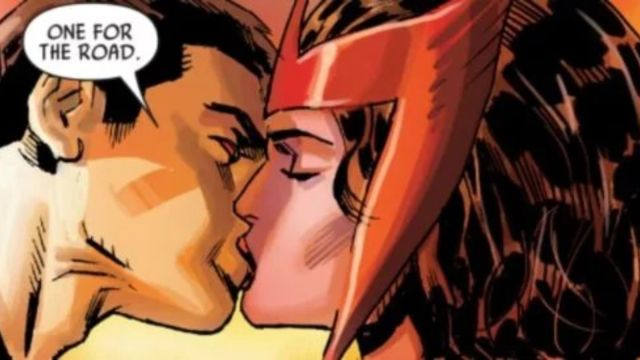 Comic books are often filled with workplace romances as it seems the Earth’s Mightiest Heroes don’t have any human resources policies stopping it. But the relationship between Scarlet Witch and Wonder Man has been an ongoing issue in the comics, but how exactly are they connected?

With reports of Yahya Abdul-Mateen II joining the Marvel Cinematic Universe as Wonder Man, many are wondering if Marvel Studios will adopt the on-and-off relationship Simon Williams has with Wanda Maximoff.

Why is Scarlet Witch linked with Wonder Man?

In the original comics, Vision was fashioned not off Tony Stark, Bruce Banner, and J.A.R.V.I.S. but instead from the brainwaves of one Wonder Man. This led to Vision feeling as though he had some sort of brotherly relation to the villain-turned-hero in red and black.

Like all things comics, this ended very poorly in the end. Vision’s dismantlement and reconstruction as White Vision (as seen in WandaVision) led to Wanda seeking to recreate Vision again so she could be with her love again. Unfortunately, Wonder Man isn’t entirely sold on the idea at first, because he’s actually harbored romantic feelings for her for many years.

This may be why the original Vision felt feelings for Wanda, although it’s only implied and something which changes throughout different writers.

Wonder Man and Scarlet Witch do end up dating, with the duo becoming another couple born out of the workplace. Both members of the West Coast Avengers (which are essentially the dregs of the team) fall in love but it’s the most unrequited love on Wanda’s side. After Wonder Man dies during a mission, Wanda unintentionally reanimates him and enters into a relationship with his fellow superhero. Is this necrophilia? We aren’t gonna touch on that.

Wanda eventually splits with Wonder Man, citing her love is for Vision, not really for him.

Will it happen in the MCU?

Wonder Man has very little known about it so far as a project, but the character is often shown as a cocky superhero who makes the move from evil to good, but still has a roguish charm about him. The introduction of White Vision in WandaVision opens up the romance arc for Wanda, albeit feels strange given how the MCU has shown Wanda has been unable to get past grief